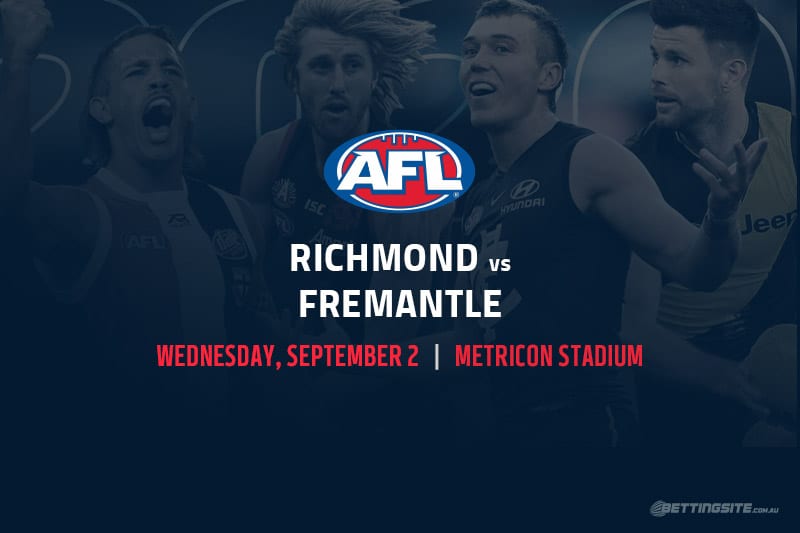 The second instalment of the Footy Frenzy continues on Wednesday night when the fifth-placed Richmond Tigers host the 14th-placed Fremantle Dockers at Metricon Stadium.

After dismantling the in-form Eagles last week, Richmond will look to keep the juggernaut rolling and bolster their position in the top four with a win over the Dockers.

Fremantle return to the Queensland hub after a successful stint back home, although they would have left with a sour taste in their mouths after turning in arguably their worst performance of the year against the Giants in perfect conditions on Saturday afternoon.

This looks like it will be one-way traffic – but if 2020 has taught us anything, it is that nothing is to be taken for granted this year.

If recent form is anything to go by, then Richmond should cover the line quite easily. They will use these last three games to fine tune any grey areas and will not want any slip-ups leading into the finals series. If Richmond are truly the team to beat this year, they’ll deal with the Dockers easily and keep the Tiger train running smoothly.

This may seem a bit surprising to some considering Jack Riewoldt’s year, but the champion Tiger is building towards a big finals series. While he only managed one goal against both Essendon and West Coast, Jack should find a few more opportunities against a defence that Jeremy Cameron and Jake Riccardi tore apart last weekend. He could be in for a bag bigger than four, but we are happy to take the $7.50 on offer.

Before a quiet performance against the Giants last week, Matt Taberner had been in career-best form. The $2.20 on offer for him to kick two goals on Wednesday night is too good to pass up, as the Freo midfield cannot be that bad two weeks in a row. He runs into a red-hot Richmond, but it’s feasible that Taberner gets a couple of good looks at it throughout the night.