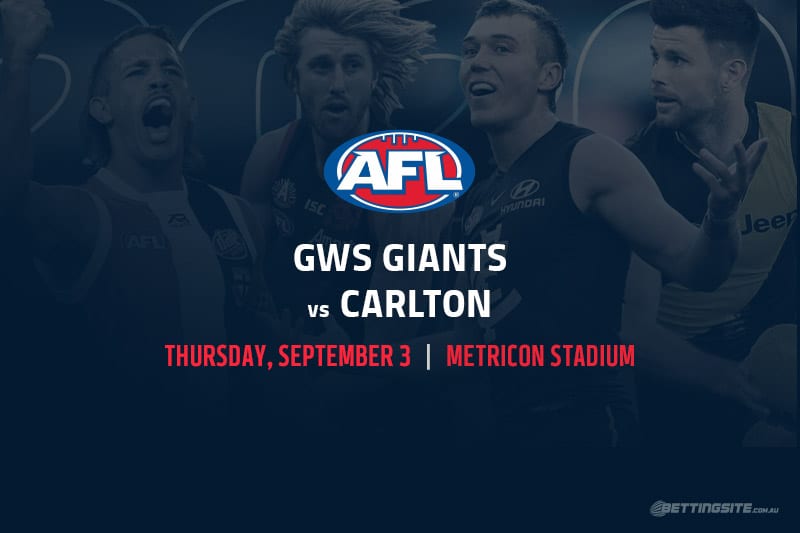 Thursday night’s match at Metricon Stadium is a must-win for both the GWS Giants and Carlton Blues if they want to play finals footy in 2020.

The Giants currently reside just outside the top eight in ninth position, but a win could see them go level with seventh-placed St Kilda on 32 points.

Finals are not entirely out of the question for the 12th-placed Blues, but they must now win every match in the run home and hope their rivals lose a few.

The connection between GWS and Carlton is well documented, as the two clubs have made a significant number of trades with each other over the years.

Former Giants Matthew Kennedy and Caleb Marchbank are ready to return this week for the Blues, while Mitch McGovern’s hamstring is still questionable.

Josh Kelly copped a huge knock to the jaw from Shane Mumford last round and could sit out this game given the short turnaround, while Phil Davis is a chance to make his return from a knee niggle.

With Callan Ward and the aforementioned Kelly sidelined, the Giants will need Lachie Whitfield to keep firing. The former no.1 draft pick bounced back from an off day in the recent loss to Sydney with 25 touches against West Coast and 31 against Fremantle, while his last contest against the Blues was a massive 40-disposal and three-goal effort.

Even though the Giants beat Carlton by 93 points in their last battle, Jeremy Cameron only managed four behinds. He kicked four goals last round and needs to parlay that into a strong match against the Blues this week. We know what Cameron can do when he’s up and about, and he won’t be happy to let Tom Hawkins waltz unopposed to the Coleman Medal.

Having won their last two clashes with Carlton by 93 and 105 points, the Giants clearly have the upper hand in this matchup. Jake Riccardi provides a marking option inside 50 with an accurate set-shot, while Whitfield, Stephen Coniglio and Tim Taranto will be hard to stop in the middle. The Giants need percentage and might get some this Thursday.