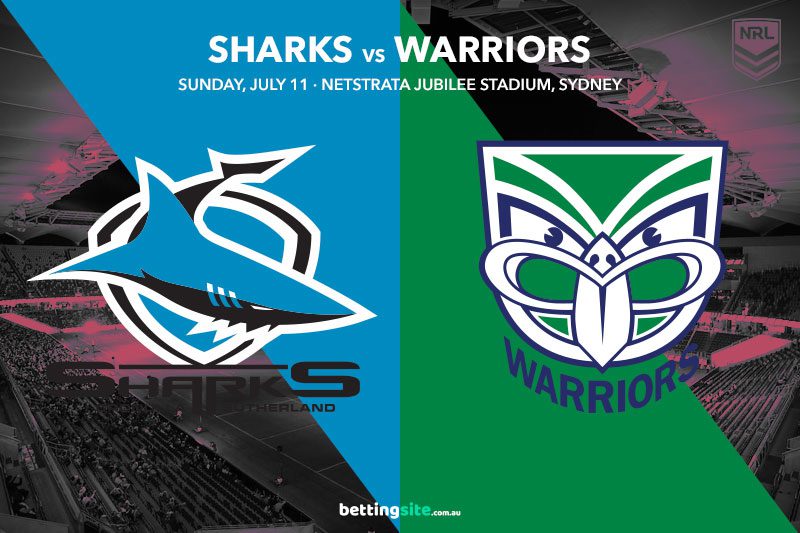 Round 17 of the 2021 NRL Premiership will conclude at Netstrata Jubilee Stadium on Sunday afternoon when the Cronulla Sharks take on the New Zealand Warriors.

Cronulla suffered a shock loss to the Broncos in Round 16 and will be keen to make amends for squandering a golden chance to win a fifth game in a row. The Warriors managed to turn a 12-point lead with nine minutes to play into an extra-time loss, leaving them with a 5-11 record on the season.

Such is the nonsensical nature of the 2021 season, the Warriors are still right in the hunt to make the finals. A win for NZ over the Sharks would make the race for seventh and eighth spot even more compelling.

Matt Moylan’s troublesome hamstrings mean Connor Tracey finally gets a chance in his favoured position at five-eighth, while Matt Lodge will make his club debut for the Warriors after a mid-season transfer from the Brisbane Broncos.

The Sharks have won seven of their last eight games against the Warriors, so the recent form is suggesting the $1.60 is a fair price to get on. Cronulla had put together a good month of footy preceding their loss in Brisbane, so this week is a big test to see if that four-game win streak was the peak or if they are still able to ascend in 2021. Their season has been a series of streaks, which included a six-game losing streak in the midst of removing coach John Morris, so do they now go on a run of losses?

Ronaldo Mulitalo has enjoyed success against the Warriors in his last three clashes with them, bagging at least one try in each of those games, so why not take the $1.57 on offer for him to get across at any time. William Kennedy is a name fans have been looking to this season, having scored a try in four of the last six games at Netstrata Jubliee Stadium. He is nice value at $2.25.

The -4.5 start at $1.90 looks the safest option. New Zealand have found plenty of ways to lose close games.

The line has come in by four points since the market opened and the +4.5 line is where thought should be given. Eight of the Warriors 16 games so far this season have been decided by four points or less and they have a 3-5 record in those games, so the online bookmakers have got this line absolutely spot on. Warriors fans will be nervous as they ponder just how their side will lose a game they’re more than capable of winning.

Addin Fonua-Blake has a try in his last three games against Cronulla, so why not take a chance on the big fella at the $5.50 price? Failing that, Ben Murdoch-Masila is $4 to get over the line and he has shown a tendency to do so in 2021. The name punters will fall in love with is Reece Walsh at $2.25 and he has scored a try in four of his last five game.

Jazz Tevaga might not be one of the biggest forwards in the competition, but he is as tenacious as they come. His opposite number in Toby Rudolph has the look of a contestant from the mid-90s show ‘Gladiators’ and has established himself as the key workhorse of the Cronulla pack. Both men will rip into one another and while they don’t demand the high profile of guys like Roger Tuivasa-Sheck or Shaun Johnson, old school fans will no doubt be keen to see these two lock horns.

The Sharks will win this game, but the track record of the Warriors at the +4.5 line is too hard to ignore this week. Seven of the eight games decided by four points or less have come against teams who are in the chasing peloton alongside them, so this one will be close.

Warriors +4.5 with Reece Walsh and William Kennedy to both score at any time is a nice three-legger for a $9 return.