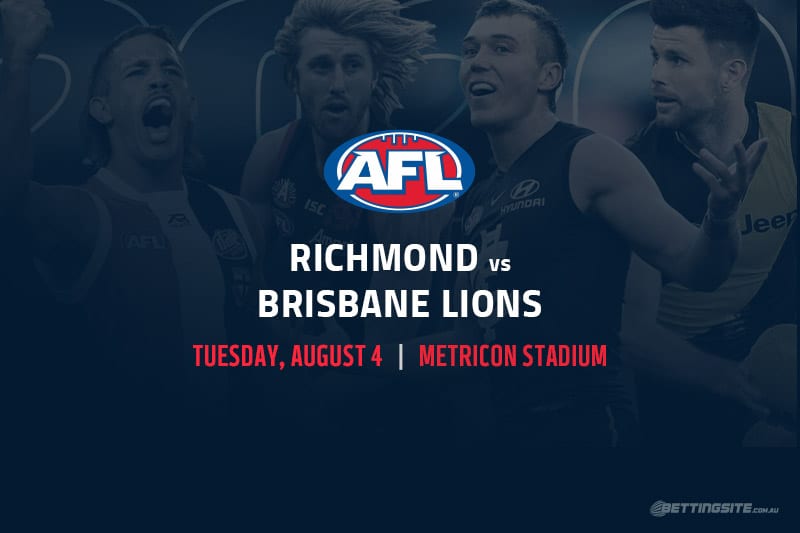 Two of 2019’s biggest rivals will go head-to-head at Metricon Stadium on Tuesday night when the Richmond Tigers and Brisbane Lions clash in round 10.

Not only did the Lions and Tigers finish second and third on the ladder last year, they battled in the final round of the regular season before meeting again in the first week of the finals.

Richmond won both clashes in emphatic fashion en route to the 2019 premiership, so the Brisbane boys have a score to settle.

The Lions come into this clash with great form, while the Tigers are fighting hard without a large portion of their best 22.

Both teams enjoyed excellent wins in round nine and have great momentum as we enter the second half of the 2020 AFL Premiership season.

Jayden Short has solidified his spot at half-back for the Tigers with his elite ball use. That quality kicking is a big part of why he is averaging 19 touches per game this year, as his teammates like to use skills at every opportunity. Short exceeded 20 disposals in two of his last three games against the Lions, so he looks a good bet to hit that mark again.

You only need to look at the last two games Lachie Neale played against the Tigers to get behind this tip. In the round 23 clash at the MCG, Neale had a career-high 51 touches; the next week in the finals, he collected another 37 disposals. The former Fremantle star has been unstoppable this season with a league-best four games of 30 touches or more, including both of his last two outings.

The most goals Dustin Martin has ever kicked in a game is six, which he has done twice in his extravagant career. Both of those efforts came against the Brisbane Lions, who were simply unable to stop the superstar when he drifted forward. Martin has kicked a goal in each of his past five games and multiples in all of his last three, so he is trending well for this one.

One of the biggest stories heading into this clash is the matchup between Charlie Cameron and Dylan Grimes. In the two games they played on each other last season, Grimes was the standout winner thanks to his strong bodywork and positioning. Cameron announced during the week that he will use his speed to get Grimes out of position, and we believe the Brisbane forward will have some joy with this tactic.

While both teams possess great stopping power, we are confident that it will be a close game with plenty of action around goal. The Tigers and Lions each topped 90 points in round nine despite some wayward kicking, so there is a good chance they will run up decent scores in perfect conditions on the Gold Coast.

The Tigers have won 14 straight games against the Lions, including their two big wins in 2019. The premiers will have the odds ever so slightly against them this week in a tight head-to-head market, but their system simply stacks up too well against a Brisbane side that has some personnel issues in key areas.