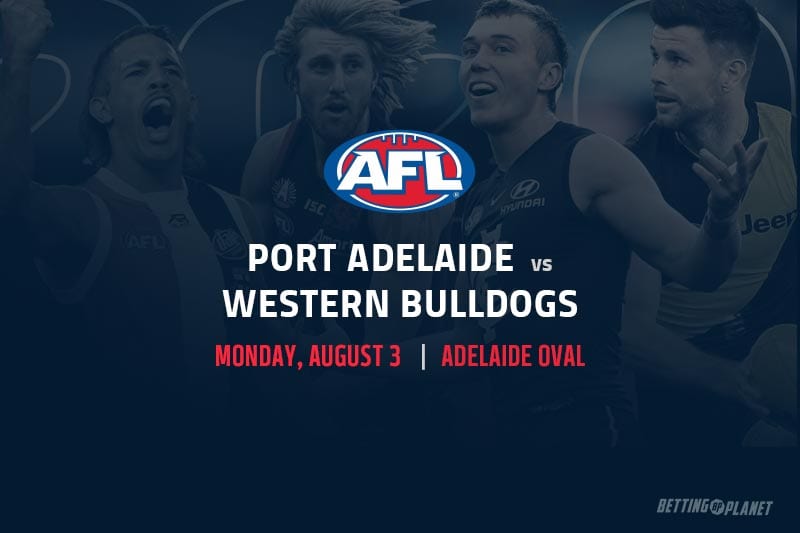 Monday night footy returns to kickstart round 10 of the 2020 AFL Premiership season with the Port Adelaide Power hosting the Western Bulldogs at Adelaide Oval.

Some of the most exciting players in the league will be on display as Port’s Robbie Gray, Connor Rozee and Travis Boak go up against the Dogs’ Jack Macrae, Marcus Bontempelli and Bailey Smith.

The recent clashes between these teams have gone either way by a wide array of margins, meaning we can expect anything when they meet this week.

Boyd Woodcock will make his debut for Port Adelaide in place of the injured Brad Ebert, while Trent McKenzie returns for the omitted Jarrod Lienert.

Josh Dunkley is back for the Western Bulldogs alongside Roarke Smith and Cody Weightman, with Billy Gowers and Jackson Trengove joining the hamstrung Matthew Suckling on the sidelines.

Besides one match in 2018 where Macrae went down injured, he has dominated Port Adelaide in recent years. It started in 2017 when the midfielder had a season-high 41 disposals, followed by two consecutive 36-disposal efforts. Macrae had 37 possessions against Richmond last week and hasn’t dipped below 25 since round five, so we can safely back him for another productive night against the Power.

Charlie Dixon is heavily backed in the Coleman Medal betting thanks to his 17 goals this season, although his form lines leave a bit to be desired. But while the Port Adelaide forward has only scored six majors in his last five games, his recent record against the Bulldogs is excellent. Dixon averages 3.5 goals per match against the Doggies in his last four contests and should find some touch on Monday night.

Both Port Adelaide and the Western Bulldogs like to play fast through the middle of the ground, where their classy midfielders and half-backs can attack from multiple angles. Adelaide Oval has allowed plenty of teams to score well, as it’s slightly bigger than the likes of Metricon Stadium and The Gabba.

The Power backed up their loss to St Kilda with a very strong showing against Melbourne, keeping the Demons to only 32 points. That could be the key against a Bulldogs outfit that was well beaten by Richmond last time out. If Charlie Dixon gets into the game, Port should have no trouble winning this.