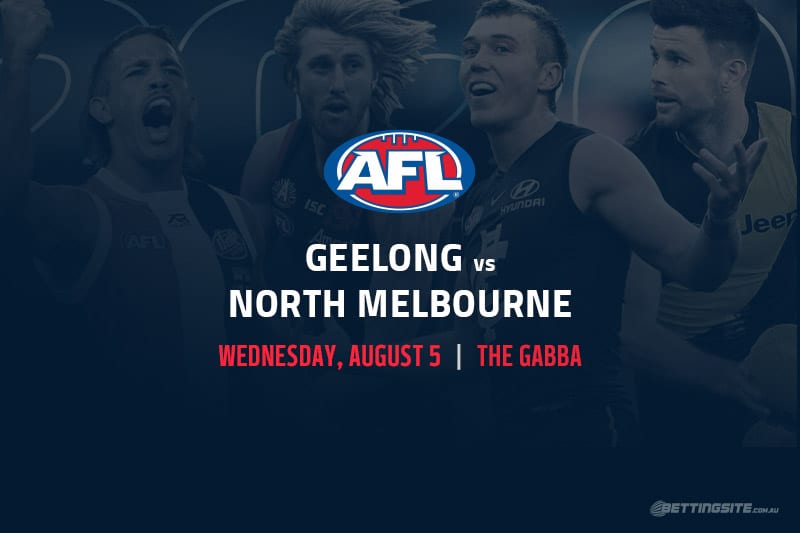 Despite their respective ladder positions, Wednesday’s matchup between Geelong and North Melbourne at the Gabba should provide great entertainment.

The Kangaroos dropped their most established forward in Ben Brown last week, yet they ran up the highest total of any team in 2020 with a massive 119 points against the Adelaide Crows.

The Cats looked poised to knock off the in-form West Coast Eagles when they took a slim lead into the final quarter, but they could not finish the job and went down by nine points.

Young Roos forwards Nick Larkey and Curtis Taylor were listed as injured after Saturday’s win, meaning they could miss this game due to the short break between rounds.

The Cats suffered no further casualties in the loss to the Eagles, but we can expect both teams to rest a few players that may be carrying niggles or showing signs of fatigue.

Rhyce Shaw’s Kangaroos can burst back into the finals frame with an upset win in Brisbane, but Chris Scott and his Cats will be determined to keep touch with the top four.

Sometimes a player simply destroys a certain team every single time he plays them, which is the case for Patrick Dangerfield against North Melbourne. Danger notched up 48 touches and two goals against the Roos back in 2016, while he has averaged 30 touches against North since 2017. Given that form, 25 touches looks a monty.

Shaun Higgins has amassed over 30 disposals in two of his last three contests against the Cats. He has already surpassed the 25-disposal mark three times this season, and we think it will happen again this Wednesday. Higgins racked up 36 disposals against a decent Richmond midfield back in round seven, so he still has the chops to hurt the better teams.

There are not many midfielders that hit the scoreboard as often as Mitch Duncan, yet there is only one team in the league that he averages over a goal per game against: North Melbourne. Having already kicked seven goals this season, Duncan is a great choice for an anytime goalscorer.

With Ben Brown out of the team and quicker ball movement ahead of him, Cam Zurhaar starred with three goals and some strong marking in North Melbourne’s big win over Adelaide. Zurhaar has 11 goals this season and looks the most damaging forward at Arden Street right now.

We love the back six that Geelong has put together, as the combination of Mark Blicavs, Tom Stewart, Zach Tuohy, Harry Taylor, Jack Henry and Jake Kolodjashnij is hard to score against. The Cats should keep the Kangaroos to a low score, while Robbie Tarrant and Majak Daw should do enough to keep Tom Hawkins quiet on their end.

The Cats are the choice for this match because they stood up to West Coast and nearly won without Joel Selwood, who may return this week to face the Roos. Selwood makes a huge difference to the Geelong midfield and will help his team beat the Roos for the sixth straight time since 2016.