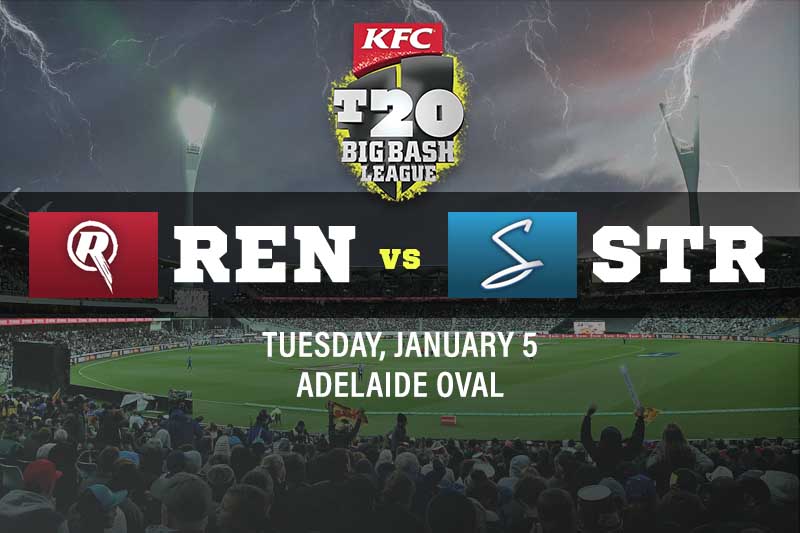 The Melbourne Renegades desperately need a win after losing their last six BBL10 matches, while the Strikers are looking to get another win in front of their home fans at Adelaide Oval on Tuesday night.

Coming off another batting capitulation, Aaron Finch and the Renegades urgently need to find some improvement, as all-out for 89 in 12 overs is never going to win a T20 match.

The Adelaide Strikers suffered their most recent loss against BBL contenders in the Sydney Sixers, but their middle-order displayed excellent potential.

Both teams are shuffling around their batting orders to find the best combination, but it seems neither have found the optimal blend yet.

It will be interesting to see how both the Renegades and Strikers handle the wicket at Adelaide Oval this Tuesday, with this Big Bash League match expected to be high-scoring.

Of all the teams in the BBL, Khan loves bowling against the Melbourne Renegades or than the others. Last season alone Rashid took four wickets in his two contests against them, while taking home one Player-of-the-Match award. The Afghan spinner was the only Strikers bowler to take a wicket in their most recent game, where he independently dismissed three Sydney Sixers batsmen. You have to back in the Big Bash League’s best spinner to demolish the fruitless Renegades batsmen.

For years Aaron Finch has carried the Melbourne Renegades, but during these tough times, the captain has been forced to stand up even taller. Finch is a brilliant player of spin that should thrive at Adelaide Oval against the Strikers. He only played one game against Adelaide last season, where he made 50 and was unfortunately run out. If Finch can maintain his wicket for a few overs, he should easily surpass 25 runs.

Considering how poor the Renegades have been in recent times, we’re surprised online bookmakers are offering odds this high for the talented Strikers. The Renegades have made less than 100 runs in three games this season and could struggle against the Strikers. With Wes Agar, Peter Siddle and the aforementioned Khan, the Strikers should notch up win number four.

Many of the top cricket betting sites offer same game multis on the BBL T20 competition, including Sportsbet and Ladbrokes.