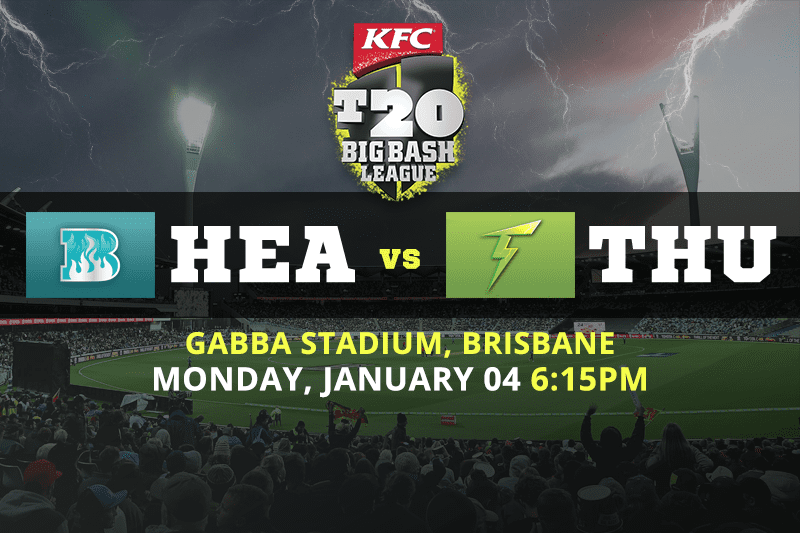 The top of the table Sydney Thunder travel up to the Gabba to go up against the Brisbane Heat who have won two of their past three games despite being without the services of their megastar captain Chris Lynn. Despite the indifferent start to the Big Bash for the Heat, they will prove incredibly tough competition for the Thunder who look unstoppable in recent games.

The Heat were impressive when chasing down the 166 that the Sixers had set them with an impressive partnership between Lewis Gregory and and Jack Wildermuth getting them across the line when they put on 50 runs for the seventh wicket with a fine display of batting. The bowling combination of Mark Steketee and Mujeeb Ur Rahman helped restrict the Sixers to 165, and the Heat will be hoping they can do something similar to the dynamic top order of the Sydney Thunder.

On the other hand, the Sydney Thunder have been near faultless in their BBL10 campaign and will look to continue that at the Gabba with the likes of Hales, Khawaja and Ferguson wanting to get the Thunder off to a flying start as they have done all season. With the likes of Oliver Davies, Sam Billings and Daniel Sams in the middle order to whack the ball to all parts of the ground towards the latter end of an innings the Thunder are quickly becoming one of the all-round complete sides in BBL10.

The Thunder may not have possessed the most fearful bowling attack in terms of big names, however they continually back up the work that their batsman put on the table. With the likes of Tanveer Sangha and Daniel Sams continually snaring wickets at crucial times and having Adam Milne at their disposal again will be crucial against the Heat. The top of the batting order is where all eyes will be though, with Alex Hales in sensational form, whilst local veterans Usman Khawaja and Callum Ferguson have proven superb support acts. With the acquisitions of Sam Billings and Oliver Davies they now look hard to beat on paper.

One of the most consistent white ball cricketers the country has ever seen, Callum Ferguson keeps on putting the runs on the board throughout BBL10. He has three scores over 50 and another score of 31 to his name. The last time the Thunder played the Heat he was dismissed for a four ball duck, and will be looking to right the wrongs from a few weeks ago with a handy contribution here.

Since coming into the Brisbane Heat side, the all-rounder from England has put in handy contributions with both bat and ball. With score of 29 and 31* in his last two matches we’re hoping he can make another handy contribution with the bat at a nice price on Monday night.