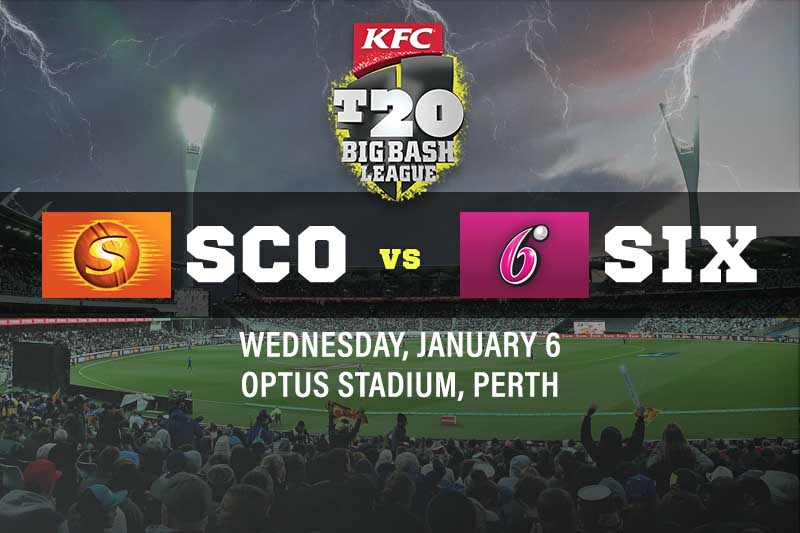 The Sydney Sixers travel to Optus Stadium, Perth, to take on the Perth Scorchers on Wednesday night.

The Scorchers are beginning to hit their straps following a poor start to their BBL campaign and with both teams coming off wins it means the 30th match of the BBL season promises to be a beauty.

A win against the Melbourne Renegades never looked in doubt for the Perth Scorchers on Sunday after a demolition job with both bat and ball. The Scorchers rocketed to 3/185 off their 20 overs thanks to Josh Inglis (72* off 41) and Colin Munro (52 off 31) with the pair combining to put on 117 for the third wicket. The bowlers then did their part skittling the Renegades for 89 in what could only be described as a one-sided affair.

The Sixers on the other hand could not have been more impressive when accounting for the Adelaide Strikers by seven wickets. They reduced the Strikers to 2/7, kept their foot on the throat and managed to hold them to a below par score of 4/150.

The run chase never looked in doubt especially when Josh Philipe smashed 41 from 24 balls before James Vince and Jordan Silk combined for an unbeaten partnership of 71 to get the job done with two overs to spare.

Somehow the top of the table Sydney Sixers are flip of the coin odds for this match against the Scorchers. Sure, Perth have put together two impressive wins — against the Strikers and then the Renegades, but in the meantime the Sixers have been doing as they please. With a top order consisting of Josh Philippe, James Vince and Daniel Hughes they sum up the conditions perfectly and usually get the Sixers off to a start that they can build on throughout the innings.

Is there a more exciting young talent on the Australian domestic white-ball scene than Josh Philippe? He is such a dominant batsman when the field is up for the Powerplay and has made three successive scores of 40 plus — 48, 48, and 41. We are hoping he can build on that form, raise his bat for a half century on a batsman friendly pitch at Optus Stadium and get the Sixers off to a flying start.

Once regarded as one of the best finishers in white ball cricket in the country, injuries have seen Ashton Turner back amongst the pack. He was not needed in the Scorchers last start victory with the top-order being utterly dominant, but at his first three bats in BBL10 he put on scores of 24, 39 and 23. We’re hoping Turner can get a bat this time round and if he does he has the ability to score big runs at a quick rate.