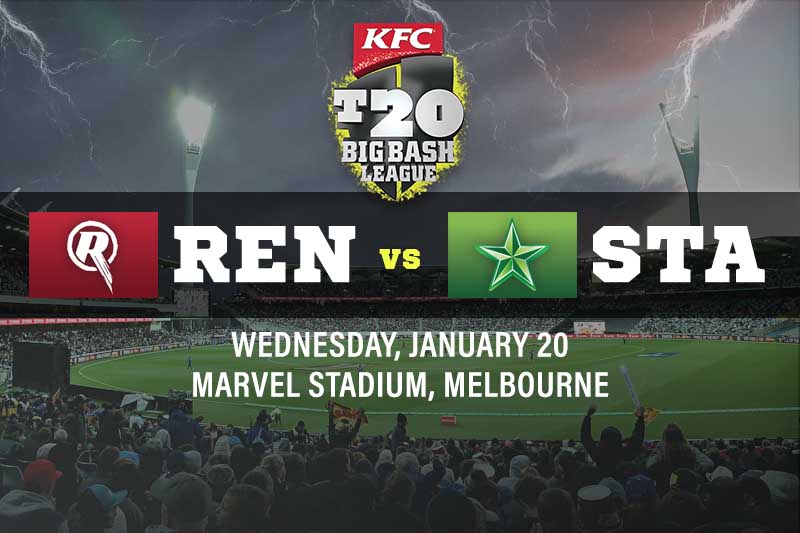 The teams last met on Saturday evening which saw the Stars comfortably account for their cross-town rivals in an all-round complete display. It’s hard to see a different result come under the roof at Marvel Stadium.

Can it get much worse for the Melbourne Renegades? They’re bottom of the BBL10 table and captain Aaron Finch is in abysmal form with the bat. He elevated himself back to the top of the order on Saturday night but attempted a big ugly hack over mid on, and missed the ball by at least a metre to lose his middle stump.

The Renegades managed to rebuild to some extent on the back of a nice partnership by Sam Harper and Shaun Marsh, before a late order batting collapse saw them fail to bat out their allotted 20 overs. The red side of Melbourne will need to regather quickly if they are to prove any chance against the Melbourne Stars.

The Stars will look to continue their push into the BBL10 finals with another win against the Renegades on Wednesday night.

With the likes of Glenn Maxwell, Marcus Stoinis and Andre Fletcher at the top of the order, and Nic Maddinson and Hilton Cartwright to finish off the innings, it’s hard to see how the Renegades can keep this Stars lineup quiet.

The Stars back it up with the likes of Adam Zampa, Zahir Khan and Billy Stanlake with the ball in hand, and will look to grab the points with a bigger prize in mind.

It’s hard to back the Renegades at any odds, but with $1.53 on offer for the Stars to further punish the Renegades it is hard to pass up. On recent performances we had the Stars marketed around $1.20 – $1.25 so strangely enough it looks to be a nice piece of value. If the Stars bat first they could easily put 200+ runs on the scoreboard, and they showed on Saturday night how easily they can restrict a batting lineup with a plethora of spinners littered throughout their lineup. Check the top online bookmakers for the best BBL odds.

It’s strange to think that despite being the second top run scorer in BBL10 with 333 runs at an average of 37, Stoinis would feel like he’s had a quiet campaign to date. With two scores of 50+ including a 97*, Stoinis will be looking to add further pain to the Renegades with a big score at the top of the order. With the small square boundaries at Marvel Stadium, and a bowling attack that falls off after Kane Richardson, we’re backing Marcus Stoinis to raise his bat at least once on Wednesday night.

In the midst of a middle-lower order collapse it was only Mackenzie Harvey who stood up to the dominance of the Melbourne Stars bowling attack. From number five he strung together a handy 29 off 17 deliveries, which was his third score of 20+ in four innings in BBL10. He may be needed to provide a similar cameo, if not something more if the top order doesn’t get the job done yet again.