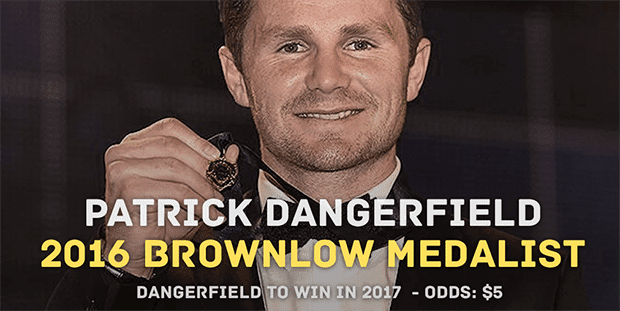 And there was good reason for it.

Just before the count, Sportsbet.com.au had him at a ridiculous $1.16 to win the AFL’s highest individual award, with Richmond tyro Dustin Martin the second favourite at a massive $18.

And, while it took all the way until the second last round – and we mean all the way, with the Seven Network dragging the count out until 11pm AEST – he broke the record for the number of votes, with 35, finishing ahead of third favourite Swan Luke Parker ($23), on 26 votes, and Martin, on 25.

And guess what – Danger is the favourite to win it again next season, installed as the early $5 clubhouse leader with Sportsbet.com.au.

“Punters are already predicting Patrick Dangerfield will make it back-to-back Brownlow Medals, with the star Cat the early favourite to win the 2017 medal,” the bookie’s Ben Bulmer said.

“Star Bulldog Marcus Bontempelli is expected to continue to improve in 2017, starting as the $7 second favourite, ahead of 2016 third-place finisher Dustin Martin ($8).

“After dominating the 2016 count it’s hard to go past Dangerfield in 2017 … while Parker appears good value at $12 after pushing Dangerfield all the way in this year’s count.”

Dangerfield spent much of the night fighting it out at the top with Sydney star Parker, who broke a record of his own, busting out 13 votes in the first six rounds.

With eight rounds to go, they were locked at 20, then Danger leapt out to lead that would never be tracked down. Still, with two rounds left, Parker was four votes behind and a mathematical chance, until 26-year-old registered two votes in round 22, giving him an unassailable lead.

“I feel so lucky to be involved in such a wonderful football club,” Dangerfield said after being presented with his award.

“It is a collaborative effort from previously Adelaide and now Geelong and the group of players that we have at the Cats, the group of coaches.

“It’s a pretty serious business, AFL footy, but I think the link between enjoying life outside of footy, putting in the hard work during preseason and in games, I think Geelong has got the balance as good as anyone.

“First and foremost, to my family, … there’s so many uncles and aunties, cousins, that for me that’s what I miss so much about being in Adelaide that I love re-connecting with now.

“She’s getting on a bit.

“I’ve missed out on a fair bit of that. To re-connect is wonderful, but family for me has always been the most important thing.

“I couldn’t have been any luckier to have spent time in Adelaide with the wonderful team-mates I had there.

“I understand why they’ve had the success they had because the hard work they put in, just how close they are as a group, how well led they are on the field as well as off it.”

Martin had a marvellous year in what was a shocker for the Tigers, amassing a mountain of possession and putting them on his back at times.

Dangerfield and teammate Joel Selwood – who have become known as Dangerwood or Selfield as the Cats’ two man band – polled in the same game eight times on the season – and that has never happened before either.

Hawk extractor Sam Mitchell cemented his name in Brownlow Medal folklore, polling in his 104th match – more than any other player in history, ahead of Gary Ablett and Robert Harvey.

Nine players registered 20 votes in the count and that’s the first time it has ever happened.

We reckon Parker will be just fine with being the bridesmaid, provided the Swans are the bride in the Grand Final against the Doggies on the weekend.