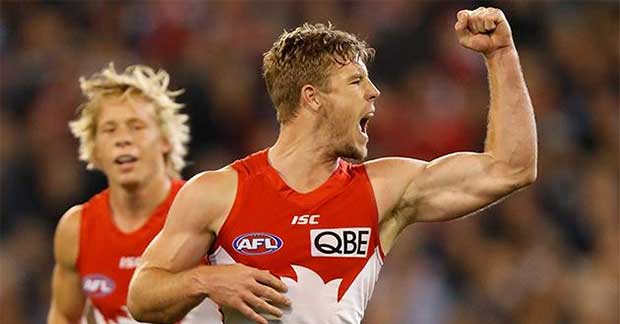 THE Sydney Swans may be heading into the Grand Final as the $1.60 favourites at Sportsbet.com.au to win their second premiership in four years, but their lineup is far from cemented heading into Saturday.

The Swans elected to leave out injured duo former All-Australian Jarrad McVeigh and 2016 Rising Star winner Callum Mills from the side that overcame Geelong at the MCG on Friday night, but neither player is a certain starter coming into the weekend.

To compound John Longmire’s injury woes, emerging defender Aliir Aliir suffered a knee injury that saw him miss the majority of Friday night’s win, but the Sydney coach said the 22-year-old’s aliment was not as bad as once feared.

Longmire said that while the injured trio failed to train on Monday, they will be given until the end of the week to prove their fitness.

“Jarrad (McVeigh) and Callum (Mills) did what they had to do on Sunday, but we did make the decision last week not to push Jarrad.

“We think it was the right call in the end. He’s an experienced player, and they’ve got a bit more to draw upon as far as what they can play with, and what they can’t.

“We’ll see what Wednesday brings, and they’re all different.

“We expect Callum to do a fair bit, Aliir to do a little bit less, and with Jarrad we’re not quite sure yet.

“It’s all about how they pull up Thursday.”

The Bulldogs are facing a fresh injury concern after the season from hell in the medical department.

Ruckman Jordan Roughead was hit in the eye after a ball was booted into his face in the second quarter, forcing him to sit out the remainder of the Dogs’ amazing six point win over the Giants on Saturday night.

Ophthalmologist Dr Andrew Atkins, the man who examined Roughead after the injury, said the swingman is far from a lock for Saturday’s grand final.

“There won’t be any permanent damage to the eye, which is obviously good news, but it’s too early to know if he’ll be right for next week. We’ll just have to wait,”

If Roughead is unable to take his place it’s likely that forgotten big man Will Minson may get a call up to the senior side after playing a key role in Footscray’s VFL premiership victory on Sunday.

Sydney is heading into Saturday’s Grand Final as the red-hot favourite to win its second premiership this decade, but star on-baller Luke Parker said his side will be taking nothing for granted.

The Swans entered the 2014 Grand Final as the team to beat against Hawthorn, but were embarrassed on the big day, and Parker said his side failed to focus in the week leading up to the decider.

“You can put it down to that.” Parker said in reference to his team’s lacklustre 2014 performance.

“You get caught up in the week, all the people patting you on the back for making the grand final and then you don’t show up on the day.

“All that outside noise we’ll focus on what we can inside the club. Grand finals aren’t just given to you. We’ve got to rock up with the mindset like tonight.”

Parker is one of many Swans who failed to fire on the big stage, amassing just 20 touches and three tackles; well down on his 2014 average of 25.9 disposals and six tackles.

The 23-year-old is averaging career-highs in both disposals and tackles in 2016, and will enter this year’s grand final as one of only five players in single figures for the Norm Smith medal at Sportsbet.com.au.

Parker is $9 to be adjudged best on ground on Saturday but the nuggetty midfielder said averages and reputations mean nothing heading into the most important game of the year.

“You don’t rock up on the day and think it’s just going to happen. It obviously doesn’t. We learn our lesson that way, I’m sure it won’t be happening again.”

Looking to place a head-to-head bet on this year’s grand final?

If you are looking to make some extra cash, your best option is to head to Sportsbet.com.au, which is offering a double your winnings promo on the match.

Place a bet on the outcome of the match and if your team wins you will get your stake doubled in the form of bonus bets up to $50.

If you are more interested in the first goal scorer market, Sportsbet is offering a great money back special.

Place a bet on any player in this year’s grand final and if he fails to score the first but goes on to kick the second, third or fourth you will get your investment back up to $50.

Looking to make a play at the line or in the head-to-head market in the 2016 grand final? You should head over to WilliamHill.com.au.

William Hill is guaranteeing to beat its competitors in non-promotion prices on the head-to-head and line betting markets on all advertised prices.