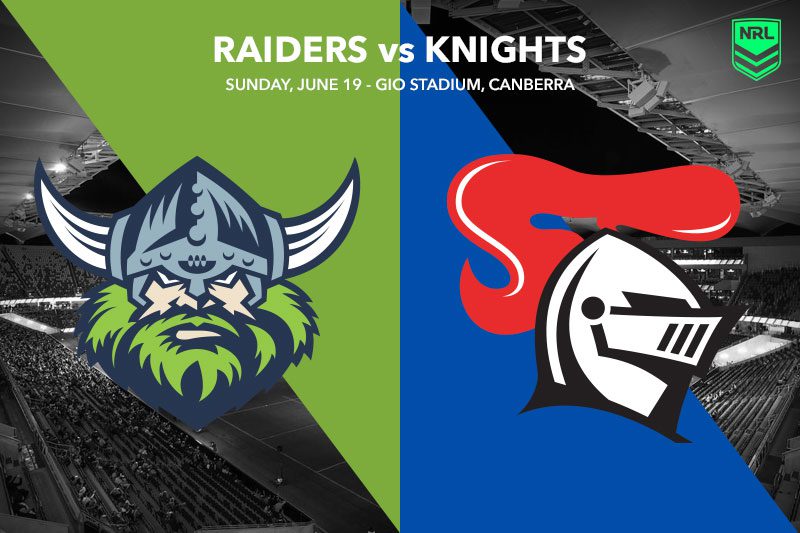 Sunday afternoon NRL action kicks off at 2pm when the Canberra Raiders host the Newcastle Knights at GIO Stadium. The Raiders have been in brilliant form of late, despite losing to the Broncos at Suncorp last weekend, where coach Ricky Stuart credited the Broncos culture for their victory. The Knights are lacking that culture, which has been evident in some of their performances since the opening rounds of the season. This clash shapes as a must win for the Knights, and they must do it in one of the NRL’s toughest road trips.

The Knights have promoted their utility and hard man Kurt Mann to the starting lock position, pushing Mitch Barnett to the second row and Lachlan Fitzgibbon out of the side. For the Raiders, Jordan Rapana returns to his right wing position, dropping James Schiller out of the starting line-up.

The war between these two clubs is almost evenly split as the Knights have won 20 out of 41 times, with 1 draw between them. The Knights are fighting an uphill battle as it is when assessing recent form, and to make matters worse, the Knights only win 27% of their games in Canberra. The Raiders have been heavily backed in head-to-head markets since opening, money that’s well justified given the Raiders have won four of their last six. The Raiders should make it five wins from seven Sunday once they beat the Knights by 13+ points, paying $2.10 with BetOnline.

Xavier Savage has been by no means perfect in recent weeks, but he has been incredibly impressive with his attacking stats increasing week on week. In two of Canberra’s last three wins, Savage has scored a try, and he should be expected to do so again on Sunday. At around $2.25 in the anytime tryscorer markets with the top online bookies, he is a great inclusion in same-game multis.

Another man in red-hot form this season, and who will be the tip of the Raiders attacking spear on Sunday, is Matthew Timoko. He will be attacking the weaker left-edge defence of the Knights. It will be Enari Tuala tasked with marking Timoko, who is expected to score a try at any time during the match at great odds of $2.50.

For all the attacking flare these two sides have, their defence throughout the season has been ordinary at best. On average between these two sides, a total of 46 points will be scored against them. Each side will be looking to take advantage of the others defensive deficiencies, making the over 41.5 total points a smart bet at $1.90.

Both lock forwards border on being too tough for their own good, and given Adam Elliott has recently signed with the Knights, will be looking to prove his worth to his future club. Kurt Mann will have the task of stopping Elliott, and it is one he will not shy away from. However, Mann’s ball-playing ability exceeds that of Elliott, who is a work horse in the centre third of the field. The respective impacts of these two locks will be as different as they are pivotal for their side’s success on Sunday.