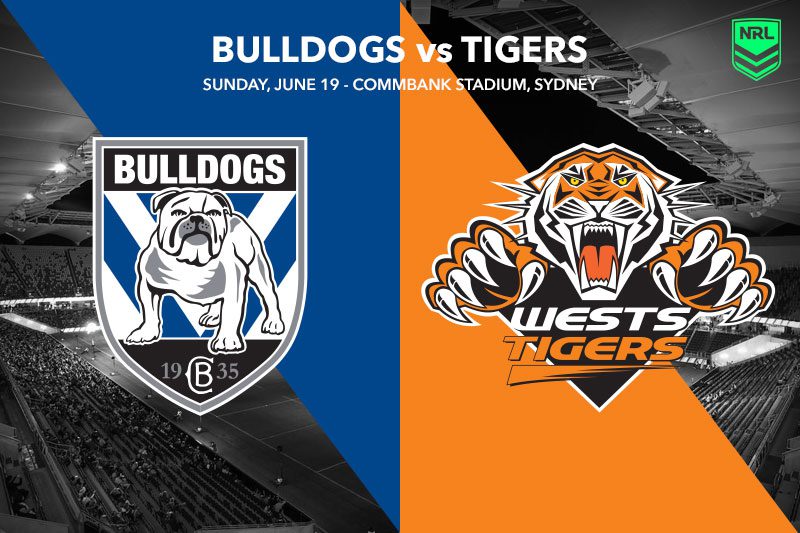 The Canterbury-Bankstown Bulldogs and Wests Tigers headline an important Sunday afternoon of NRL action – for all the wrong reasons.

It shapes as a game that both teams will be desperate to win if they are intending on avoiding the wooden spoon, as they are both locked on just three wins for the season.

The Canterbury Bulldogs in the last month have, surprisingly, been one of the highest-scoring teams in the competition. Interim coach Mick Potter has slowly been adding a few wrinkles to their attack, culminating in a confident, flamboyant destruction of Parramatta in their last start.

The first Jake Averillo try off a freak intercept was down to some luck, but the makeshift fullback’s second try came as a result of a team whose confidence and skill level are trending in the right direction.

They come in as the favourites for the first time this season, which tells you just how bad of a run the Tigers have been on in recent weeks. The line is only 1.5 points between the two teams – so no matter which way it goes, the top bookmakers have it going right down to the wire.

Josh Addo-Carr has five tries in his last two games since being omitted from the New South Wales State of Origin team, and it looks like he could be on for another double this week. He is paying $5.20 for two or more tries, and he will see plenty of football.

David Nofoaluma on that side of the field for the Tigers continually rushes in, which is going to open up a ton of space for Matt Burton to get one of his excellent chip kicks in. Once Burton catches him out of position, it will create doubt and open up chances with ball in hand.

The Tigers only a month ago defeated the Bulldogs in a high-scoring affair, but they’ve continued to get worse each week since that win and, like the Bulldogs, decided to sack their coach.

In another stunning turn of events, they even released Luciano Leilua from the remainder of his contract as it was believed he was headed to North Queensland early. There was just one problem: the NRL determined that the Cowboys didn’t have the requisite cap space to make the signing, so the Tigers just released a player in a position of need they could use in a bid to avoid the spoon.

We write this to highlight just how bad things are behind the scenes at the Concord-based outfit. Six weeks ago their fans would have chalked this game up as a win that would help them stay off the bottom of the ladder, but the improvement of Canterbury means they are very much in the race. It is only bye points keeping them above 16th heading into this round.

One positive for Wests Tigers fans is the return of Adam Doueihi on the interchange bench after finishing his rehabilitation for an ACL injury.

Ken Maumalo is at $2.20 to score at any time and he will get all the inclusions in every same-game multi. Outside of him there isn’t much certainty when it comes to getting across the line for the Tigers.

Jake Averillo is a player who no-one is sure what his best position is, but at the moment he is making a good fist of playing fullback. Daine Laurie has moments of class at the back, and despite his diminutive stature, he possesses great strength which helps him evade defenders on the edge. Two young players who are quick off the mark and have an unpredictable element in their game will make for good viewing.

The Bulldogs win at the 1-12 margin as they record back-to-back wins for the first time in a season since 2019.

Bulldogs 1-12, Josh Addo-Carr to score a double and Ken Maumalo to score is paying $25.70 on Ladbrokes and it feels like a red-hot chance.