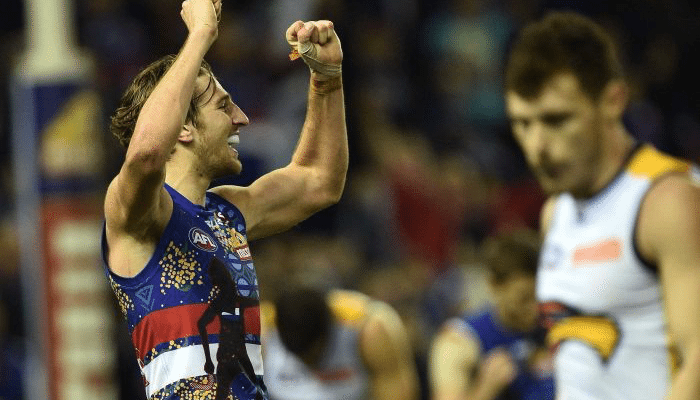 THE Western Bulldogs odds to make the top four have shortened significantly after their gallant win over West Coast in round 11, coming in from $6.50 to $2.50 at Sportsbet.com.au.

The Dogs withstood a late surge from the Eagles to record an important eight-point win at Etihad Stadium.

The Bulldogs currently occupy the fourth spot on the AFL ladder, locked on points alongside Hawthorn.

Luke Beveridge’s men have a vastly superior percentage to the reigning premiers.

Dogs’ coach Luke Beveridge lauded his team’s performance, claiming the victory was an ‘outstanding’ result for the club.

“It was a real arm wrestle for most of the day and then when we gapped them in the last quarter… I thought we just needed to compose the ball a little bit and just settle ourselves down,” Beveridge said.

“It was a very interesting last stanza. We sent ourselves into chaos too many times and put pressure on ourselves when we needed to be a little bit more composed.

“They’re a very good side, the Eagles. They’re always going to be extremely hard to beat and I just thought the boys were sensational right across the 22.”

The Western Bulldogs face a pivotal road trip to Adelaide to face Port on Saturday afternoon, where they will be the $1.80 favourites.

The Dogs then host the Cats at Etihad Stadium before their bye, a match that sees them go in as the $2 underdogs.

If they are able to record victories against the Power and the Cats expect both their top four odds and their premiership odds ($11) to firm even further.

Carlton firms in finals market after another impressive showing

CARLTON’S sparkling 2016 season has seen Crownbet.com.au slash the Blues’ odds to make the finals even further, moving the men in Navy into $6.50.

The Blues belted the Lions by 38-points at Etihad Stadium, a final margin that belied just how dominant the home side were.

The Blues were winless after the first month of football, but have since strung together six wins from their last seven matches to place themselves just one game outside the eight.

Carlton ($6.50) and Port Adelaide ($2.75) are the only two teams currently outside the top eight who are in single figures to play finals this season.

Despite the huge buzz around the Blues in 2016, Carlton coach Brendan Bolton was quick to pour cold water on any finals talk.

“I’d be foolish to do that [talk about finals],” Bolton said.

The Carlton coach cited their heavy loss to league leaders North Melbourne two weeks ago as an indicator of just how far his side needs to improve to be playing finals.

“We’re still going to have some hard hits I would have thought.

“Only two rounds ago we had a 10-goal loss against North, but we’ll learn from it. We’ve got a mantra of every week trying to get better. I’m hopeful.

The Blues go into Sunday’s clash against the Saints at Etihad Stadium as $1.60 favourites before their bye week in round 13.

Bombers odds on favourites to finish on the bottom

THE bottom of the table clash between the Bombers and the Dockers which ended Fremantle’s winless streak has sealed Essendon’s wooden spoon fate according to Sportsbet.com.au, which now have the Dons at $1.33 to have the least amount of wins in 2016.

The Bombers were comprehensively smashed by the Dockers, who until then had failed to register a single premiership point in season 2016.

The win is a sign of things to come according to Sportsbet, who now have the Dockers as the only team in the market in double figures at $11.

The Bombers and the Lions are now the teams in 17th and 18th position on the ladder, and their July 24th clash at Etihad Stadium could decide who finishes the season anchored to the bottom of the ladder.

Brisbane is the $3.25 second favourite register the least amount of wins this season.

Essendon coach John Worsfold is optimistic that Essendon can avoid its first wooden spoon in 83 years.

“I’ve had a lot of experiences through my sporting career and my personal life that we deal through events that happen that we don’t want happen but we’ve got to deal with it,”

“I understand you can get back out there and bounce back and go well.

“When you’re coaching a team that’s expected to play off in a grand final, that’s a massive challenge.

“This is a challenge in a different light but not one that I’m nervous or worried about, one that I’m really excited about.”