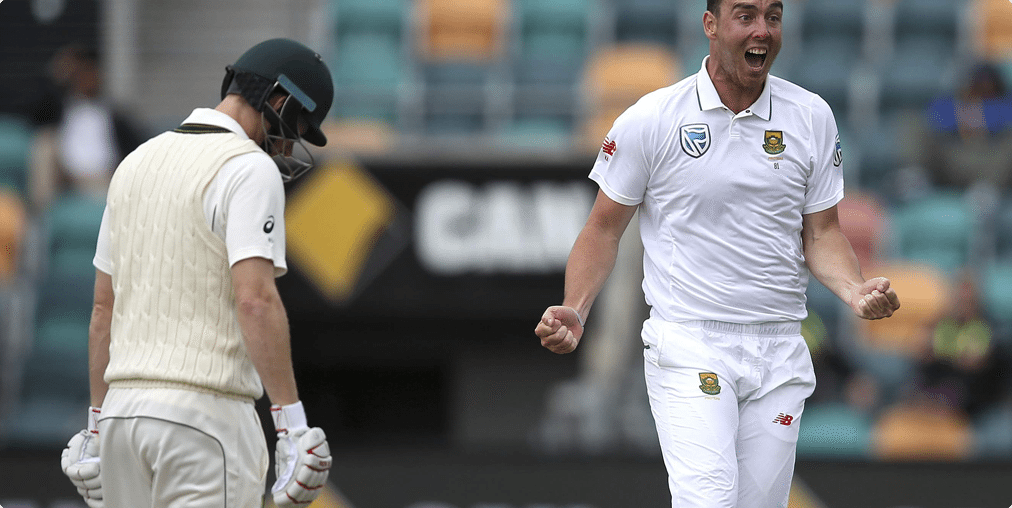 DESPITE coming off a horrendous tour of Sri Lanka, Australia opened the Test summer of cricket as the bookies’ pick for the three-match series against South Africa.

Then things went wonky in Perth, where CrownBet’s $2 favourites in the match betting threw away a commanding lead with a combination of naive shotmaking, scrappy fielding and all-round incompetence.

Even after that shock defeat, the Aussies headed to Hobart as the frontrunners in a contest that was slated for a draw due to inclement weather.

It rained, but that didn’t stop South Africa – at massive $5 outsider odds – from knocking over its hosts inside four days to seal a resounding series victory.

Now, after five Test match defeats in succession, punters and bookmakers across the country have at last jumped off the Baggy Green.

Steve Smith’s embattled eleven are paying $2.85 at Sportsbet to win the third Test and salvage a modicum of credibility from what has been disastrous few months.

Australia hasn’t been this bad since it followed up a 4-0 hiding in India with back-to-back defeats in the first two Tests of the 2013 Ashes tour.

But this stretch also includes five straight defeats in One Day Internationals during the recent visit to South Africa.

Rod Marsh couldn’t hack it any longer, quitting his post as chairman of selectors ahead of schedule on Wednesday.

Former head selector Trevor Hohns has taken up the reins on an interim basis, with Greg Chappell also joining the panel.

But can they work any kind of magic before Pakistan arrive in December?

Australia’s batting order is a wreck.

Joe Burns did nothing at Bellerive to suggest he should get another run at the top of the innings, while the shine has well and truly worn off Adam Voges.

Who even knows what to expect from Callum Ferguson – an ageing enigma whose first-class record tells the tale of a big talent who never quite got it all together.

And while Peter Nevill is an excellent glovesman who fought hard with the bat in Perth, he is a throwback to a time before Adam Gilchrist when top teams could afford to carry a stodgy, battling number seven.

It’s hard to fault the bowlers when the bats are giving them so little to work with, but the pace attack looks short of leadership without a Peter Siddle or a Ryan Harris-type in the mix.

The form of Nathan Lyon is also a worry.

The ‘GOAT’ has taken two wickets at 120.50 this series, and one wonders if it might not be time to give Jon Holland or the fit-again Steve O’Keefe another run in the spinner’s slot.

Whatever the team looks like for the Adelaide Oval Test, which starts Thursday, November 24, Australia can do nothing now to prevent a fall out of the top three in the ICC Test rankings.

England will leapfrog the Aussies into third place regardless of the result in the day-night Test, but the Proteas will also climb a rung or two if they complete a clean sweep.

That means Australia might be ranked as low as fifth in the world by the time they lock horns with Pakistan at the Gabba on December 15.

Misbah-ul-Haq’s men are currently ranked second in the world, behind India, but they could head to Brisbane in top spot if they salute on their two-Test stint in New Zealand this month.

All markets provided by Sportsbet.com.au