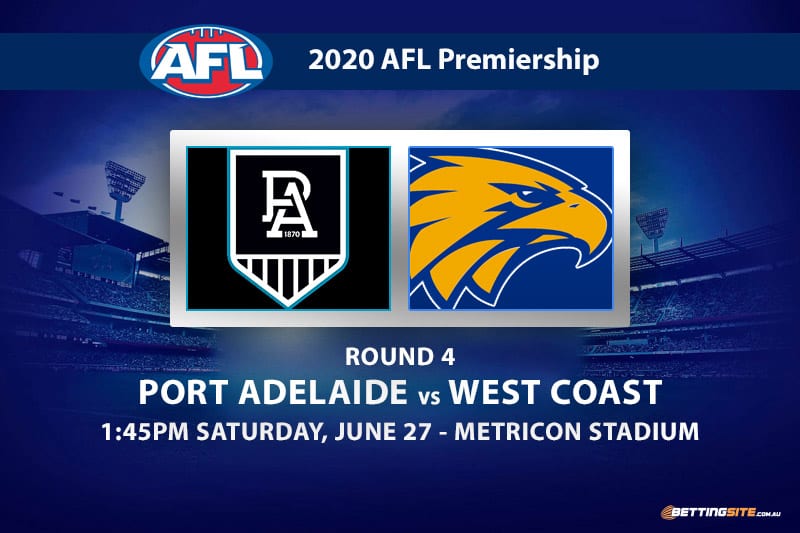 The Port Adelaide Power and West Coast Eagles go head-to-head at Metricon Stadium this Saturday in a clash that could shed some light on whether either of these teams mean business in 2020.

The hub system on the Gold Coast has worked well thus far, but it appears the change of lifestyle has affected the Eagles more than most.

It is no secret that the West Coast squad is desperate to get home, which might explain why the 2018 premiers looked so listless in their back-to-back losses against the Suns and Lions.

Port Adelaide has only spent one week in its hub, as Ken Hinkley’s men played the Showdown in round two before making the trip to Queensland.

This is a big chance for the undefeated Power to show their premiership credentials, while you can bet the Eagles will want to silence their critics and knock off these upstarts.

Coming back into the senior side after a big break can be tough for any player, but Ollie Wines made it look easy against the Dockers last week. Racking up 25 touches and dominating the contest, the big-bodied midfielder looked razor sharp. Wines will back up his performance with another strong game against the Eagles, who have a smaller midfield that Wines should overpower.

He may be small in stature, but Luke Shuey is one of the toughest players in the game. He is the kind of player who stands up even when his side is down, which has shone through in the past two weeks. We see the 2018 Norm Smith Medal winner getting over 25 touches against the Power due to his excellent work rate.

The 2018 draft class of Zak Butters, Connor Rozee and Xavier Duursma has been split following the news that Duursma will miss a few weeks due to a low-grade hamstring strain. With his best mate sidelined, Butters needs to lift in the goals department to compensate. We like the way he moves inside 50 and liken him to Robbie Gray in terms of how dangerous he is around goal.

Someone needs to step up inside 50 for the Eagles, as their star forwards have been well below par to start off the 2020 season. Jack Darling and Josh Kennedy put on 109 goals combined last season, but they have kicked only five in three games this year. If the Eagles midfield can produce clean footy for the forwards, a player like Darling who excels on a lead should profit.

The Eagles are struggling to score and the Power have conceded the fewest points of any team this season, which points towards the unders in this clash. Even if Port Adelaide has a great day going forward, the Eagles do not look dangerous enough to tip the total over 130.

Although Ken Hinkley’s Power are yet to take a major scalp this season, their ball movement and defensive pressure has looked far better than West Coast’s in the past fortnight. With Wines back in the midfield and Charlie Dixon in good form inside 50, the Power are starting to become a threat.