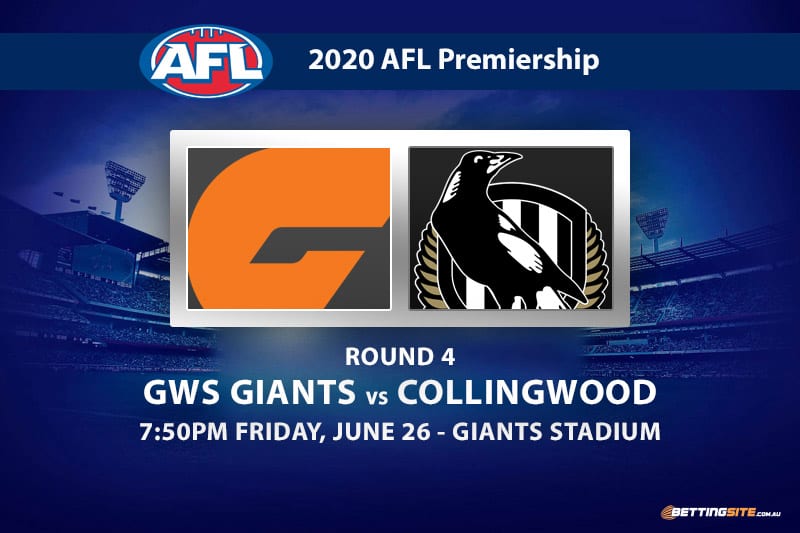 If Friday night’s match between the GWS Giants and Collingwood Magpies is anything like their preliminary final clash in 2019, we are in for a ripping game of footy.

A rivalry is building between these two clubs following a handful of trade deals and two big battles in the past two finals series.

Hamstring and calf issues have kept Collingwood midfielder Adam Treloar sidelined all season, but the former Giant is pushing for selection this week after getting through a practice match.

A trio of GWS guns are set to return with Toby Greene, Josh Kelly and Lachie Whitfield all looking to pass fitness tests to confirm their availability.

Whitfield started against the Western Bulldogs last week but suffered a head knock in the first quarter and sat out the remainder of the contest under the concussion rule.

Mason Cox was influential during his return performance in the Collingwood reserves, but will it be enough to push Darcy Cameron out of the squad?

Nathan Buckley and Leon Cameron are both hoping to get their teams to the AFL Grand Final this season, so this match may well serve as a preview of things to come.

Zac Williams is one of the game’s best rebounding defenders, but he was poor in last week’s loss to the Dogs. Williams will look to bounce back this week and make a statement with hard running and quality delivery from half-back. He has averaged 23 disposals per game in his last three outings against the Pies, so it will be interesting to see if that form stands up.

Josh Daicos struggled in his first three seasons at Collingwood, but the son of Peter is starting to find his footing at senior level and continues to grow each week. The young midfielder had 24 touches from 65 percent game time against Richmond, proving he can win the ball at a prolific rate despite the shorter quarters.

Small forwards are hard to stop when they have a nose for the footy and speed to lose opponents, qualities that Brent Daniels has in spades. While not a prolific scorer, the third-year player has shown a knack for kicking timely goals in big games. Collingwood’s key defenders let nothing through in the air, meaning a player like Daniels will be valuable at ground level.

Jaidyn Stephenson made an immediate impact in his first game back in the seniors, kicking Collingwood’s first two goals in a big win over St Kilda. The 2018 AFL Rising Star faded out of that match as it progressed, but he is so often a threat in the early exchanges and looks a good bet to kick the opener again this week.

Both the Magpies and Giants have shown a focus on defence since the restart, but we can expect games to open up and scoring to rise over the next few rounds. It will be a big week for Jeremy Cameron and Jordan De Goey, who have both been quiet in their first two games back.

Collingwood to win by 1-19 points

Even if Greene, Kelly and Whitfield all return, GWS may struggle to break down a Collingwood defence that has looked very strong since the resumption. It is rarely a one-sided affair when these two teams meet, however, so we are taking the Pies to win it by under 20 points.