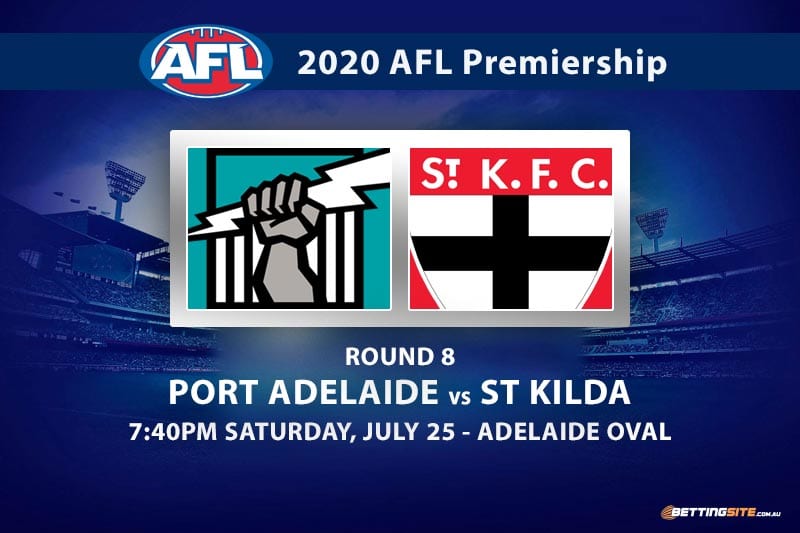 Up to 25,000 fans will head to Adelaide Oval this Saturday night when Port Adelaide hosts St Kilda in a battle between two of the AFL’s hottest commodities in 2020.

In a year where scoring has been way down, the Saints rank equal first in the league for goals kicked and the Power sit third with only one less major.

St Kilda overcame a poor head-to-head record to defeat the Adelaide Crows on Monday night, and Brett Ratten’s mob will have to do something similar if they want to beat Ken Hinkley’s Power this weekend.

Port Adelaide has won its last eight matches against the Saints dating back to 2011, when Matthew Primus was head coach and the newly formed Gold Coast Suns saved the Power from the wooden spoon.

St Kilda will have to make do without Josh Battle, who suffered a cheek fracture against the Crows, while Dan Hannebery is likely to spend another week on the sidelines as he works back from a hamstring injury.

Both Ryan Burton (quad) and Steven Motlop (ankle) have been ruled out for round eight, while Connor Rozee must pass a fitness test after limping out of the win over Carlton with a sore heel.

Xavier Duursma didn’t have his usual impact in his first game back from injury, but another week of training and recovery will see the second-year gun return to his best here. Duursma’s betting value has increased due to low disposal counts in his last two games, one of which was cut short by a hamstring strain, so now is a great time to jump on.

Although Sebastian Ross has never beaten the Power throughout his 131-game career, he has enjoyed some big games against them. Averaging over 26 touches in his last four clashes with Port, the hard-working midfielder will be in the thick of the action as he searches for some form in St Kilda’s new-look midfield.

We all enjoyed Robbie Gray’s after-the-siren goal last week against the Blues. The Port Adelaide star did something similar in 2017 to the Saints, against whom he has an excellent track record over the years. We are backing Gray to have an impact at the other end of the game this week by scoring the opener, as his craft and experience always make him hard to match up early.

The roles have reversed for forwards in 2020, as it’s the smalls who are keeping the scoreboard ticking over. Dan Butler has been a revelation since his move from Richmond in the offseason, slotting 13 goals from his seven games thus far. He has kicked two or more goals in five of his last six games, including a treble at Adelaide Oval last round, so the $3.40 on offer here looks like money for jam.

As we highlighted earlier, the Saints and Power are two of the top-scoring teams in the league, and we expect them both to continue that trend at Adelaide Oval this Saturday. Charlie Dixon is a goalkicking machine for Port and the forward combinations at St Kilda make life difficult for opposition defenders, so we can expect plenty of action in front of goal.

All the past performances and statistics point toward the Power, which we agree with entirely. Ken Hinkley’s men are on top of the ladder for a reason and they will flex their muscles against the Saints, beating them both out of the middle and inside 50.