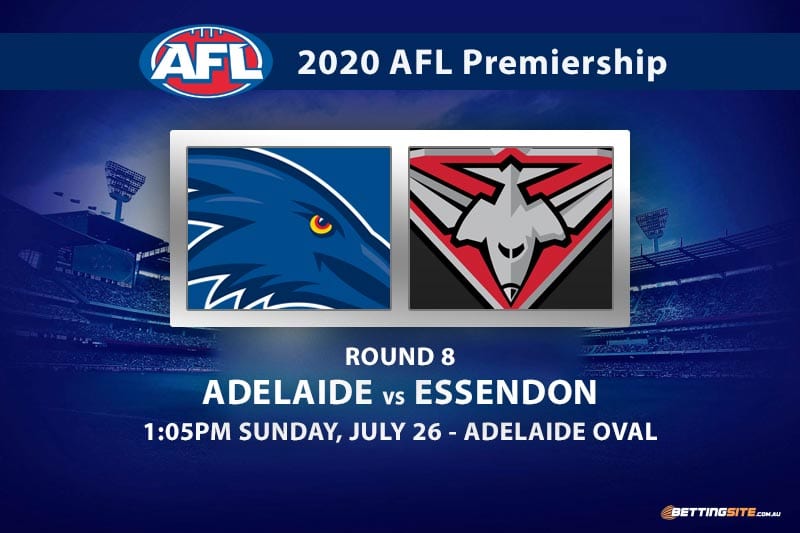 The Adelaide Crows will have another chance to secure their first win of the 2020 AFL season when they take on Essendon this Sunday at the Adelaide Oval.

Matthew Nicks is on track to break an unenviable record set by Brett Ratten at Carlton in 2007 and matched by Damien Hardwick at Richmond in 2010, as both went winless in their first nine games as an AFL head coach.

This is a decent chance for the Crows to get their opening win of the campaign, as the Essendon Bombers will be missing several senior players and are coming off a big loss to the Western Bulldogs.

Dylan Shiel is still suspended for the Dons, while Cale Hooker will sit out for the next few weeks after straining his calf.

Darcy Fogarty is a chance to return from his shoulder injury for Adelaide, which desperately needs more presence and goal threat inside 50.

John Worsfold and Ben Rutten must find a way to inspire their depleted Bombers this week, because this looms as a real danger game that could seriously affect their finals chances.

Fresh off a 23-disposal game against the Saints, Ben Keays is starting to find his feet at Adelaide after moving down from the Brisbane Lions in the offseason. It looks like Keays has taken on a new role designed to inject some productivity into the midfield, and we think he can back up with another good showing against this weekend.

David Zaharakis only had 38 touches in his first four matches of 2020, but the experienced on-baller has found some form with two 20-disposal games in the last fortnight. Zaharakis loves to play the Crows, averaging 29 touches in his last four clashes with them, so we can expect him to find plenty of footy against the out-of-sorts Adelaide midfield this Saturday.

It is extremely difficult to find value for Adelaide in the goalscoring markets at the moment, as the team does not have any consistent goalkickers. Tom Lynch is a classy linking forward with fitness levels through the roof, and that running power could see him expose the Essendon defence in the second half and hit the scoreboard.

Which Shaun McKernan will we see this week – the one who tears teams apart, or the one who has zero impact on the game? This is the type of match where the athletically gifted forward needs to stand up and make his chances count, as the Bombers are missing Jake Stringer, Joe Daniher and Cale Hooker from their forward rotation.

The Crows are playing well below the league standard this season, while the Bombers are starting to feel the weight of injuries and suspensions to their key players. The Dons will need everything to go just right in order to rack up a big total, so the unders looks the safe bet here.

As we said about the Bombers last weekend, we think they will struggle without Dylan Shiel, Dyson Heppell, Jake Stringer, Joe Daniher and now Cale Hooker too. That’s not to say the Crows will win it, but they showed enough against St Kilda on Monday to suggest they can cover the line.