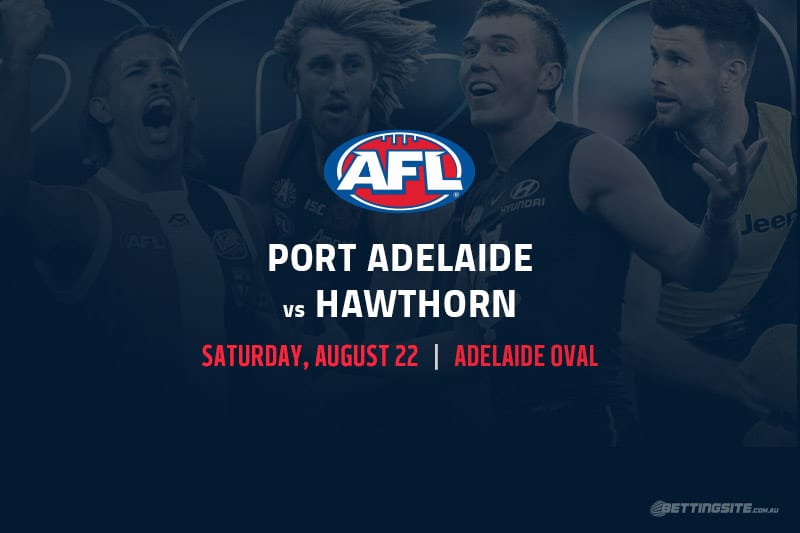 The first-placed Port Adelaide Power will host the 16th-placed Hawthorn Hawks at Adelaide Oval this Saturday in round 13 of the AFL 2020 season.

Dan Houston and Peter Ladhams are expected to miss this match for Port, as they broke COVID protocols during the week and subsequently sat out the main training session on Wednesday as the AFL began its investigation.

James Sicily tore his ACL tear last round, putting him on the long-term injury list and leaving a massive void in the already pressured Hawthorn back line.

Although the AFL betting markets for this one are rather lopsided, the midfield battle should make for premium viewing as Tom Mitchell and Jaeger O’Meara go up against Travis Boak and Ollie Wines.

Houston has played in two positions this season, floating between half-back and the midfield. Whenever he is in the middle, Darcy Byrne-Jones tends to find more of the ball as the chief running defender. Now that Houston is out of the game, we expect Byrne-Jones to star in the back line and top 20 disposals for the fourth time this season.

Ken Hinkley has used Robbie Gray in a variety of roles this season, but we can expect the Power hero to spend plenty of time deep forward on Saturday. Gray kicked four majors against the Hawks in 2018 and also kicked a goal against them last year. With Charlie Dixon providing a great contest every week, Gray should have a few chances to crumb and snap.

Sicily is a bigger out than Houston and Ladhams combined, since he’s been the pillar in defence for the Hawks this season. The combination of Scott Lycett, Ladhams and Dixon did not work last week against the Cats, so Ladham’s absence might even bring balance to the team. Dixon will have a field day against Sam Frost, who doesn’t have the strength to match the man-mountain. We considered taking the Power at 40+ for added value, but the Hawks’ midfield is strong enough to make half a game of it.