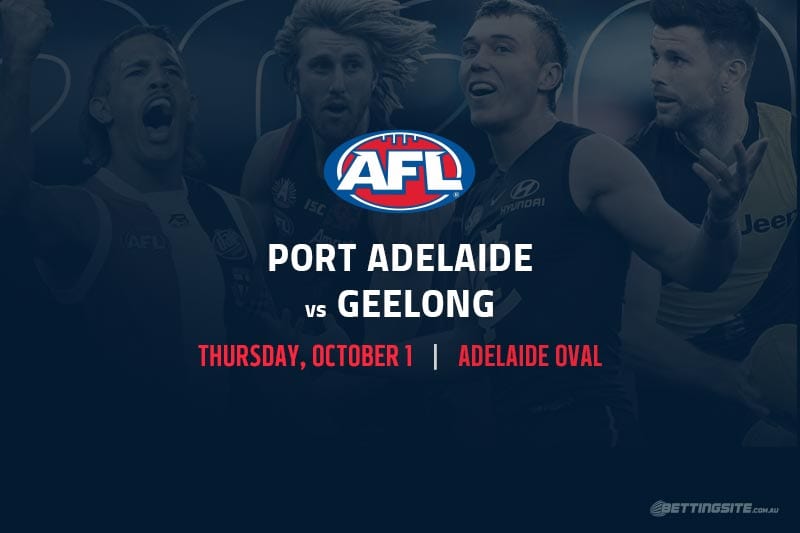 The Port Adelaide Power will host the first qualifying final of the 2020 AFL season when they face the Geelong Cats at Adelaide Oval this Thursday night.

Both sides have gone through patches in 2020 where they looked unstoppable, but the Cats looked their best when beating the Power by 60 points back in round 12.

The pre-finals bye week has given both teams time to assess each other and recover some key players, as Ryan Burton, Tom Clurey and Zak Butters will return for the Power, while Rhys Stanley and Tom Atkins will be considered for Geelong.

Adelaide Oval has a completely different atmosphere in 2020, which should give the Power a big boost with a restricted capacity crowd of 25,000 fans in attendance.

Knowing the winner of this contest jumps straight into a preliminary final will motivate both clubs, as a week’s break will also be handy against a team coming off a big semi-final.

The last four matches have not been ideal for Mitch Duncan, who hasn’t surpassed 20 touches during that time, but the inclusion of Stanley will be important. Duncan has not found the footy as often when Stanley hasn’t played, so the Geelong no.22 will be delighted to see the ruckman return this week. Duncan has played a full game against Port Adelaide 11 times and surpassed 20 disposals on nine occasions.

Cool heads are critical in finals, and Brad Ebert is the most experienced player in the Port Adelaide forward six. Both Ebert and Robbie Gray will be critical to the Power’s fortunes, but we think Ebert is the better value this week coming off his two-goal performance against Collingwood.

Even though the Cats had their way with Port Adelaide in round 12, the circumstances are vastly contrasting this time around. For one, the home ground advantage will make a big difference. Tom Hawkins played a great game on Tom Clurey last time, but Tom Jonas is tipped to take on the 2020 Coleman Medallist this week. The Power proved against a strong Collingwood outfit in round 18 that they are serious contenders this year.