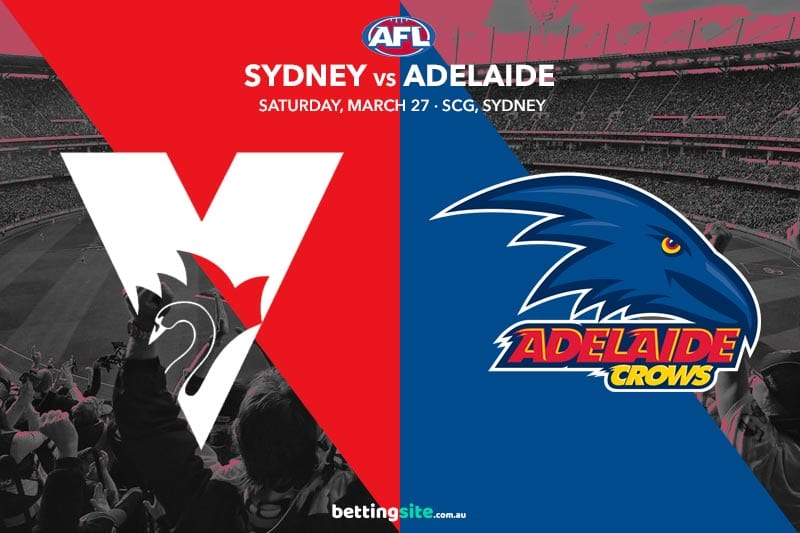 Surprise first-round winners Sydney and Adelaide will lock horns on Saturday afternoon at the SCG in round two of the 2021 AFL Premiership.

The Swans smashed the Brisbane Lions to the tune of 31 points, while the Adelaide Crows were equally as impressive when toppling last year’s grand finalists Geelong by 12 points on the back of a massive first-half performance.

The Crows will be without two of their key cogs in defence, with Jake Kelly out due to concussion and Luke Brown sidelined with an achilles injury.

The Sydney Swans, on the other hand, regain the services of Lance Franklin for the first time since round 23, 2019 into what was already a dynamic-looking forward line.

The Swans managed 19 goals in their dismantling of the Lions, and the new rules seem to suit their new style of play perfectly. The youngsters Errol Gulden and Logan McDonald kicked three goals each, and their X-factor Isaac Heeney managed to boot three goals too. Tom Papley just managed the one major, and we expect the star small forward to bounce back with a big performance against the Crows.

The return to form of Taylor Walker was one of the biggest talking points in the Crows’ round one victory over Geelong. The former skipper managed five goals against the star-studded Cats in a dominant display by the big forward. Against an undermanned Sydney Swans backline, we expect Tom McCartin to go the big Tex, so the odds of $2.80 for Walker to kick three or more goals represents excellent value.

Despite both teams posting impressive wins, the two captains have plenty of improvement to come in round two. Josh Kennedy only managed 17 touches in his side’s big win over the Lions and only used the ball at 35% disposal efficiency. Rory Sloane racked up just 20 disposals against the Cats, but he had an impact in the forward half with eight score involvements. With a near-perfect day for footy forecasted on Saturday, odds of $2 for Kennedy and $2.80 for Sloane to cross the 25-disposal mark look like decent value.

It will be Buddy’s first game in 18 months, and we expect the great man to return with a bang. The Swans midfield managed to get their hands onto the ball quick-smart at centre bounces last week, and we expect the mids to be on the lookout for Franklin early in the game. He will most likely renew his rivalry with Crows defender Daniel Talia, but Buddy looks in prime condition for his first game in 2021 and if he gets a look at the goals early on, expect him to make the most of it. Franklin is paying around $8.50 with the top online bookmakers.

Tom Papley did not have much of an impact on the scoreboard in round one against the Lions. He has struggled against the Crows in recent times when coming up against either Rory Laird or Luke Brown, but the former will spend most of his time in midfield this weekend and the latter is out injured. With close to $3 on offer for one of the best small forwards in the competition to kick three goals, it’s a bet we are happy to take.

The Swans were impressive against the Lions, and back at the SCG we expect them to get the job done against a handy Crows outfit. Expect Josh Kennedy to make the Sherrin his own after an indifferent start to his year, while Crows forward Billy Frampton will look to build on his impressive showing in round one with a couple of goals against this undermanned Swans outfit.