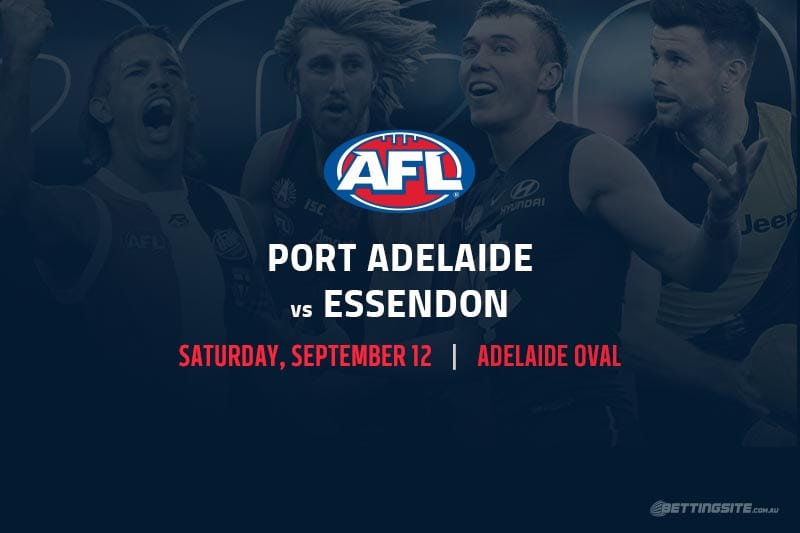 Will Essendon bounce back against Port Adelaide this Saturday, or will this be the last hurrah for the struggling Bombers?

Even though a spot in the finals is still not out of the question for John Worsfold’s Dons, their dreadful record against teams above them on the ladder suggests they could be in for a long afternoon.

A big crowd is expected at Adelaide Oval this Saturday to watch the league-leading Power for the last time before they start their finals campaign in Queensland.

Three players will miss this clash across both sides, as Irving Mosquito suffered an ACL tear against the Cats, Ryan Burton injured his quad and Zak Butters is serving a two-match suspension.

Joe Daniher could make a return after he was managed in round 16, while Port Adelaide youngster Mitch Georgiades must pass a fitness test.

The last time these teams met ended in a 59-point spanking in favour of the Power, and we may see something similar this weekend.

We have our eyes on Ollie Wines leading into this contest because of his size. The Bombers lack big bodies in the midfield, meaning Kyle Langford may have to play on Wines this week. Langford is having a decent year but is still developing his skills around the ball, so the matchup favours the former Port Adelaide captain.

Robbie Gray has tormented Essendon over the course of his career, and he looms as one of the most dangerous forwards on the park this Saturday. With Butters suspended, expect Gray to spend plenty of time sniffing around the packs and stoppages inside Port’s forward 50. He booted four goals last time he faced the Dons, and we expect something similar this weekend.

Considering the Bombers went down by 66 points to a Geelong outfit that eased up in the second half, Port Adelaide should deliver a similar result on its home deck. The fans at Adelaide Oval will give the Power a big boost and a fond farewell before they make the trip to Queensland for the finals.