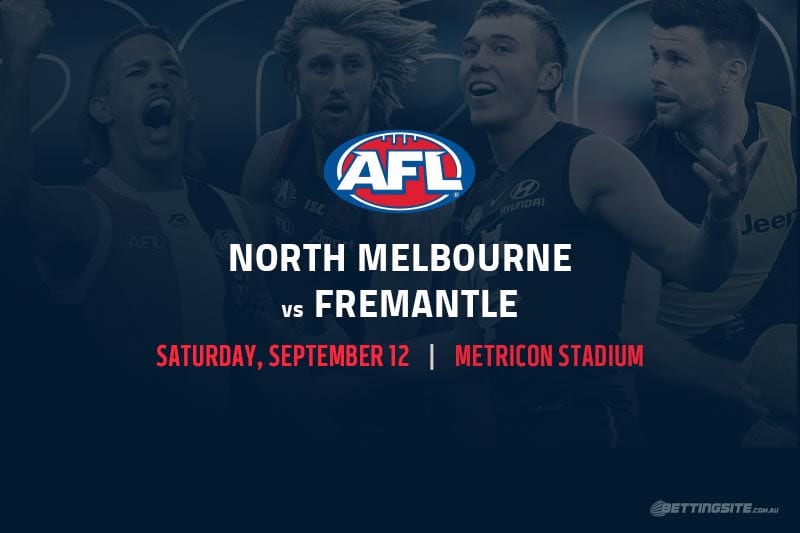 Saturday afternoon footy kicks off with 17th-placed North Melbourne taking on 13th-placed Fremantle in what many will view as a dead rubber.

North haven’t won a game since defeating Adelaide back in round nine. Over the last fortnight they have lost convincingly to Gold Coast and Port Adelaide while not showing much to suggest they can push the Fremantle Dockers this weekend.

Freo bounced back from a disappointing fortnight by defeating Melbourne quite convincingly in Cairns on Monday night. If they bring that same effort and intent into this game, they should prove far too classy for this Kangaroos outfit.

This may seem a bit outlandish, mainly because these two sides do not necessarily put teams to the sword when it counts. However, considering how bad North Melbourne have been for the last month or so, Fremantle could show the Roos a thing or two on Saturday afternoon. The Dockers are arguably one of the most improved teams this year, so perhaps this is their chance to put a big score on the board.

If Fremantle are to put a gap between themselves and North Melbourne, then they need key forward Matt Taberner to continue his good form. So far in 2020 he has bagged 26 goals from his 15 games, although he could not convert any of his three opportunities in the win over Melbourne. Punters will be hoping he can reverse that form on Saturday afternoon.

Mitch Crowden is quickly becoming an important piece of the Fremantle jigsaw. He would be one of Justin Longmuir’s favourite players, because all he does is hassle opposition defenders whenever they get the ball inside Freo’s forward 50. He has five goals to his name from his eight matches, and let’s hope he can get on the board this weekend.