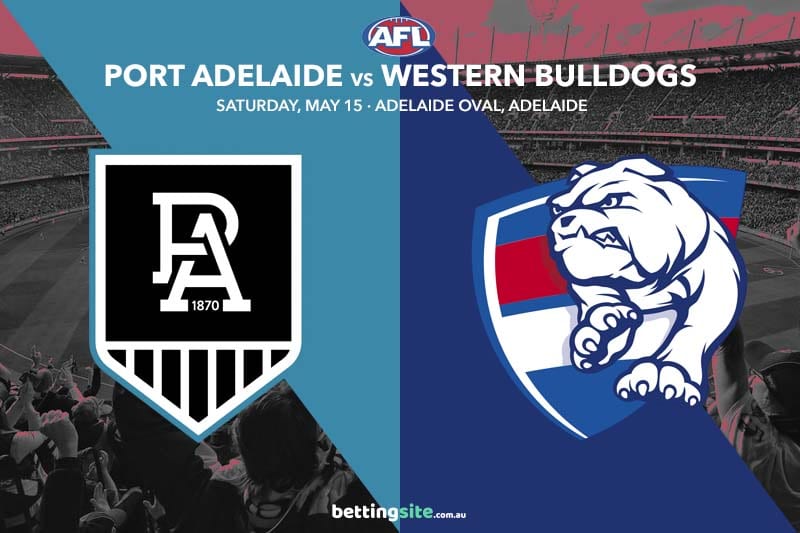 PORT Adelaide will host Western Bulldogs at the Adelaide Oval on Saturday night, in what looms as match-of-the-round and a potential grand final preview.

Port Adelaide is coming off a resounding victory in the South Australian Derby last weekend against arch-rivals Adelaide. They will also receive a further boosting by welcoming back Dan Houston (shoulder) but will be without ruckman Scott Lycett (suspension) for the next month.

The Dogs were below their best for the best part of three quarters, but a six goal to one final quarter saw them get the better of Carlton in a pulsating contest. They are set to be boosted by the inclusions of Ryan Gardner, Tim English and Bailey Williams to help strengthen their ruck and backline stocks.=

The Power are narrow favourites at $1.70, whilst the Western Bulldogs are outsiders at $2.27 with online bookmakers, despite only suffering one loss this year.

Port Adelaide have won four of the last five matchups between these two sides, and in their past 11 games at Adelaide Oval the Power have only dropped one game. That  loss was against Richmond in last year’s preliminary final and with this set to have massive top four implications so early in the season, both teams will be treating this as an early final and a proper test to see where they are in the scheme of AFL power clubs.

The Dogs arguably have the best midfield group in the competition, but Port Adelaide’s is nothing to be scoffed at. Bontempelli, Treloar and Macrae v Boak, Wines and Gray on a Saturday night makes for one of the best matches we have seen in the 2021 season to date, with not much separating the two teams.

Ollie Wines is in career best form to begin 2021, and plenty would argue it is the same for Bulldogs gun Marcus Bontempelli. Two of the absolute bulls of the competition are set to go head to head on Saturday night in a truly mouthwatering prospect. Bontempelli is coming off a clear best on ground performance last weekend against Carlton, whilst Wines is averaging over 30 disposals for the first time in his career. Both players are genuine barometers on how their team is going, and whoever claims best on ground honours between the two, their respective team should be leaving with the four points.

Aw we mentioned earlier all the numbers point towards a Port Adelaide victory. The Power have won four of their past matches against the Dogs and will look to continue their strong form at Adelaide Oval. With Richmond and Carlton exposing the Bulldogs issues down back, we expect the Power forward line to give Luke Beveridge too many headaches on Saturday night.

It just has not been Charlie Dixon’s year so far, but he gets his chance to get back into form against a struggling Bulldogs backline. He is set to man up on Alex Keath who has conceded seven goals in his past two games. Dixon has just the 12 goals to his name from eight games, but in front of a massive crowd at Adelaide Oval, we expect big Charlie to put in a dominant performance.

These two top four combatants will potentially meet in September, but with this being an old-fashioned battle, the Power look to have too many answers for what the Doggies pose. Led by Charlie Dixon and a strong all-round midfield performance, we expect Port to be too good for the Dogs over four quarters.