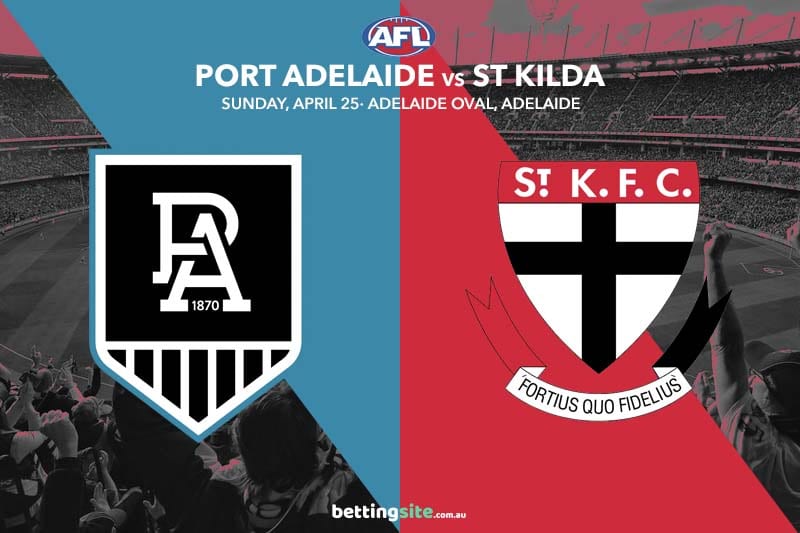 Port Adelaide and St Kilda will feature in the final round six match of the AFL premiership season when they collide at the Adelaide Oval on Sunday night.

Ken Hinkley’s Power have smoothly navigated through the first five rounds of the 2021 season, while Brett Ratten and the Saints have been under the pump since their round two loss to Melbourne.

The Power will advance to 5-1 should they knock off the visitors, which has dangerous implications for the Saints, potentially resulting in a 2-4 start to a season they want to play finals in.

Although the Saints will start as $4.50 outsiders with Bet365, you cannot rule them out as they knocked off the Power in an unexpected upset last season.

Only the last-placed North Melbourne Kangaroos have allowed more opposition goals than the Saints this season, as their team defence has been underwhelming in the first five rounds. The Power have one of the most dynamic forward lines in the AFL, so you can expect a high-scoring game from the home side. The Power are paying $2 with Sportsbet to kick 14.5+ goals.

There are two groups of players we think will provide good value in the disposal markets for this match; the Port Adelaide midfielders and the St Kilda defenders. We expect most of this match to take place inside Port Adelaide’s attacking half, which will give more opportunities to the like of Josh Battle and Callum Wilkie for St Kilda.

Land of the Giants: Charlie Dixon vs Max King

Both Charlie Dixon and Max King will be eager to play in the perfect conditions this Sunday, as the marking targets should thrive under the lights at Adelaide Oval. Dixon kicked two goals against the Blues last weekend after failing to hit the scoreboard in rounds three and four, while Max King has kicked nine goals from his four matches this year. Dixon and King both top the goal-kicking markets for their respective sides, and we think they will be the hardest players on the ground to stop this Sunday night.

Charlie Dixon to kick 3+ goals
Charlie Dixon’s goalkicking form over the past two seasons displays a very strong pattern, as the powerful forward only kicks multiple goals in winning matches. The flat track bully kicked four goals against the Saints in 2018, but he only kicked one major against them in last season’s upset. An up-and-about Port Adelaide should get Dixon involved early and see the key forward slot three goals.

Port Adelaide Power to win by 1-39
The Power’s last two victories have fallen within the 1-39 bracket, and we suspect this match will follow suit. The Saints will get back Rowan Marshall and Zak Jones, two huge inclusions that will help keep them within touching distance of Port Adelaide.

Port Adelaide Power to win by 1-39

Same game multi: 3 legs @ $10.25
The Saints jumped the Power last season and stole a victory, but we cannot see this week’s match playing out the same way. Dixon will be a strong pillar up forward for the Power, helping them secure their fifth win of the season. Callum Wilkie averages 17 disposals in the Saints losses, so he should surpass the 15-disposal mark this weekend.