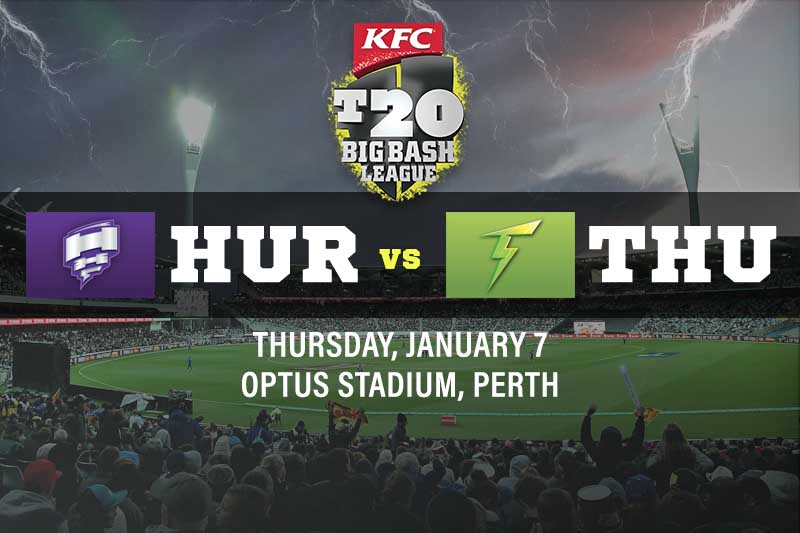 Two of BBL10’s major contenders will face off on neutral territory this Thursday, as the Hobart Hurricanes and Sydney Thunder battle at Optus Stadium in Perth.

Both sides are coming off close losses in their most recent outings, as the Hurricanes couldn’t beat the Melbourne Stars and the Brisbane Heat ran away with a win over the Thunder. The Hurricanes are a narrow favourite with cricket betting sites.

Daniel Sams stands out as one of the Big Bash League’s most exciting bowlers, but he may miss this upcoming clash after a knock to the head ruled him out of his last game with concussion.

The quick turnaround between matches in BB10 means Sams will need to pass a concussion test before taking to the field this Thursday, which appears unlikely at this stage.

Having made just under 200 runs from his last four matches, Hales is one of the most in-form batsmen in the competition. Not only is the Englishman in good form, but he was brilliant against the Hurricanes last season, putting together 118 runs across their two BBL09 contests. The extra bounce at Optus Stadium shouldn’t be a problem for the big hitter, as he’s strong enough to put most balls away. Hales form in the last fortnight of BBL action has us convinced he is capable of scoring 25 runs.

The extra bounce and tough batting conditions should provide Meredith with an excellent opportunity to control this game. The 24-year-old quick is improving rapidly, recently taking two more wickets against the Stars. Meredith missed both contests against the Thunder in BBL09 with injury, but he’s ripe for Thursday’s big game at Optus Stadium.

Ben McDermott opened the batting against the Stars on Tuesday and made a highly-impressive 91 off 58. If McDermott can replicate that effort and give the ‘Canes more stability at the top, they will be a huge chance to knock off Sydney, but that is not their only path to victory. Dawid Malan is breezing through most teams and making great scores, which should get them over the line here.

Many of our top Australian bookmakers feature same game multi bets including Ladbrokes Australia and Sportsbet.