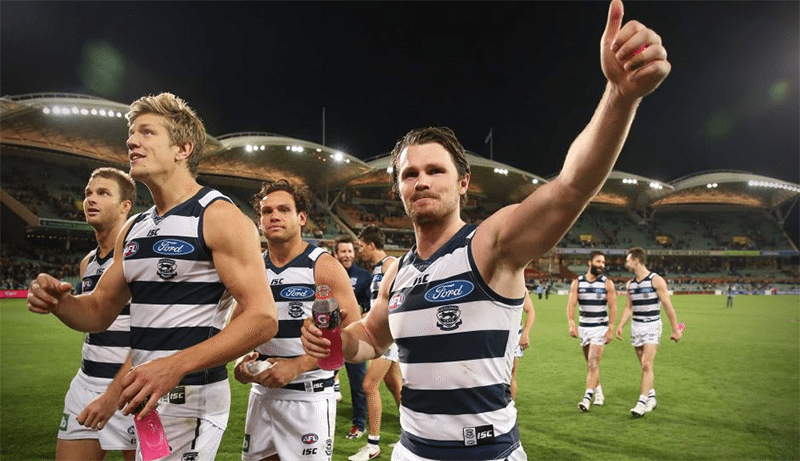 PATRICK Dangerfield has been declared the 2016 Brownlow medal winner at sportbet.com.au.

The online bookmaker has elected to payout any Brownlow bets placed on the Geelong midfielder prior to Friday night’s best on ground performance which saw his odds firm even further to the $1.53 mark.

The Cats champ started the season as a $9 chance, but a string of best on ground performances saw his odds slashed almost week-to-week to the borderline unbackable amount they currently sit at.

Sportsbet decided to pull up stumps on Danger and reward the smart punters who got on early, effectively proclaiming the former-Crows chances of winning his first ever Brownlow medal to be a formality.

CrownBet performed a similar stunt last season when they paid out on Nat Fyfe to win the medal after just eight rounds while in 2013 Sportsbet declared Gary Ablett the winner mid-season.

Both went on to claim the award later in their respective years.

The online betting agency declared they paid out $632,000 to in excess of 3,500 punters who astutely invested their money on Dangerfield.

Sportsbet continue to offer a range of Dangerfield markets.

Punters can get $5.50 if they think Danger can poll the most votes in Brownlow medal history, and $6.00 for the great man to quinella the medal alongside his captain Joel Selwood.

Despite issuing an early payout, the Brownlow medal betting market is still up at sportsbet.

Currently Dangerfield is at the $1.53 quote, while Dustin Martin is the only other man in single figures at $8.

Danger looks to have the medal already around his neck, so the most intrigue on Brownlow night will be the leader at the round 10 point.

Sportsbet has four players in single figures to be leading the count after ten weeks, while a further five players are at the $16 quote or under.

Brownlow medal betting – who will be the leader after round 10?

All odds provided by sportsbet.com.au

THE Coleman medal race is set to be a race in two according to WilliamHill.com.au, which has moved Swans star Lance Franklin to $2 and reigning champ Josh Kennedy to $2.10.

Emerging Sun Tom Lynch is the only other man in single figures at $5.50.

The two-time Coleman medallist Franklin is the current leader after his two majors moved him to 60 for the year, one goal clear of Kennedy.

The three men have contrasting final months to the season.

Franklin only plays against one side currently ranked inside the top-eight, while Kennedy’s Eagles play first, second and fifth on the ladder and an invariably tough derby against the Dockers.

The Gold Coast play Essendon and Collingwood in the final month, and if the 23-year-old can kick big bags against their lowly opponents he could pip the former medallists at the post.

ONLINE bookmaker Sportsbet.com.au has opened a market on the 2017 AFL premiership, placing the Giants at head of affairs at the $5 quote.

Sportsbet is not anticipating the AFL’s other expansion side making a September impact, placing the Gold Coast Suns at the $34 mark.
Surprisingly, sportsbet is expecting the Bombers to bounce back from their 2016 debacle to press for the finals next year, placing the Dons alongside Port Adelaide on the eighth line of premiership betting at $21.

Brisbane ($501) is the only team in triple figures at this stage.