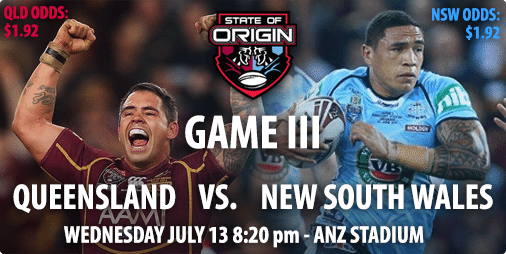 ANOTHER year, another Queensland series win. Why did we think it would be any different in State of Origin 2016?

Fortunately, the dead rubber is not something Queensland and New South Wales do very well, so we are expecting to see some fireworks both on and off the pitch on Wednesday night.

There’s been a slight shift in the market since Monday, when both sides were slated at level $1.92 odds.

The Blues will be keen to prevent the whitewash at ANZ Stadium, and Sportsbet.com.au has the home side as slight $1.90 favourites to register their first win of the series.

With such narrow margins in the match betting, all the value is in the player markets.

Here are some of the tastier exotic wagers punters can invest in this Wednesday night.

While State of Origin is usually the domain of old heads, it’s two young guns from either side who represent the best value in the first tryscorer betting.

Let’s take a look at who they are.

The West Tigers dynamo is one of the best attackers in the league and precisely what the Blues lacked in the first two games of the series.

Tedesco has played almost 200 minutes less than almost every player in the top 10 scorers in the NRL, yet the 23-year-old still sits on 11 tries – equal third in the competition.

NSW coach Laurie Daley said Tedesco had been “knocking down the door” to play Origin and he expects him to make a big impact on Wednesday night.

Former Blues coach Gus Gould wrote in a piece for the Sydney Morning Herald that Tedesco was the perfect man for the Origin job.

“His style is more in line with successful NSW fullbacks of the past, such as Garry Jack, Tim Brasher and Anthony Minichiello.

“He is a brilliant ball runner. He is aggressive, fast and his first thought is to see himself bursting through the line.

“If he can support the right people in the right areas of the field, he will cause Queensland a lot of problems.”

It is hard to argue with Gussy when it comes to Origin matters, so we are sticking with the man they call ‘Teddy’ to have a huge impact on Wednesday night.

After selecting the brilliant Brisbane Bronco to score the first try in our last two previews, it would be remiss of us not to include him for Origin III.

Oates has made a huge impression in his debut Origin series.

Not only did the 21-year-old score his first ever representative try in the Maroons’ series-sealing Game 2 victory, but the young gun also lit a fire underneath the Blues over their tactics.

“Can I get a penalty? I got cleaned up twice. I couldn’t believe that. I got the biggest hit of the night, I think. He got me an absolute ripper.”

Does this mean Oates will have a target on his back going in Game 3? We hope so, because the harder they go at him, the faster he will sidestep them.

We are backing Corey to cross the line at least once on Wednesday.