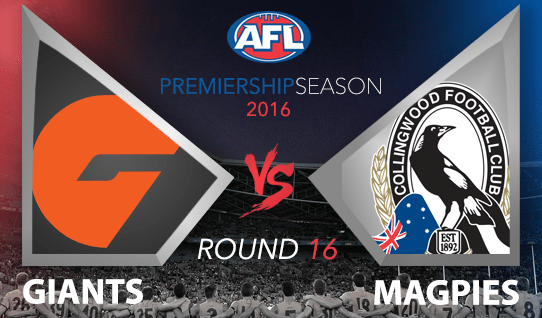 GREATER Western Sydney have not lost a game at Spotless Stadium this season.

The Giants whacked the reigning triple premiers Hawthorn by 71 points, smashed the Gold Coast by 91 points, Carlton by 62 points, Sydney by 42 and the Western Bulldogs by 25.

Translation: Collingwood are in serious trouble.

While the Pies are on a two-match winning streak, giving them an ever-so-slight sniff of the eight, it’s not a question of whether the Giants will win, but by how much.

GWS have had a week’s rest to nurse wounds and rest up to prepare for the Pies, and they take a three-game unbeaten run into the match after whacking the Blues 18.19 (127) to 9.11 (65) before the bye.

The young side has a bevy of stars who are beginning to stand out, led by midfield gun Dylan Shiel, who had 34 possessions in the Carlton rout.

Captain Callan Ward (33 touches) has been unstoppable this season, with yet another 30-plus possession game, while Stephen Coniglio had 31.

Steve Johnson continued to show why Geelong probably should not have given up on him, booting four goals in a 22-disposal, six-mark performance that has become more the norm than the exception after his move north.

Jeremy Cameron also got amongst it with three goals and looms as a massive danger man for the Pies.

We like him for first goalscorer, at $7 with Sportsbet.com.au, as he has been quietly building over his past three matches with one, two, then three goals.

Look for a big bag from Jezza, who some say has plateaued, but we believe he can improve again.

Outside of our favourite, Stevie J is always a danger at $9.50 and, if you like juicier odds on your first goalscorer picks, you could do worse than Jonathan Patton.

The General certainly has not fulfilled his promise, but a couple of knee re-cos will do that to you. He is still one of the biggest men on the ground, a good mark and a solid kick for goal.

At $18, Patton is way over the odds for a key forward.

On the disposal front, Shiel is coming of a ripper against Carlton and he loves playing at Spotless, having registered 35 and 34 twice in games there. The $1.91 for him to have 30 or more touches is solid.

Collingwood, meanwhile, also last played Carlton, but they had a tougher time than the Giants, eking out a 12-point win in what some are saying was the worst game of the season.

In dour conditions, neither side looked anywhere close to a contender, but Scott Pendlebury stood far above the pack.

The Pies captain collected 34 disposals and booted a goal, making a mockery of the wet and freezing conditions. He proved the difference in that game and will again be key for the Pies. He is $1.72 to have 30 or more.

One Pie with plenty to prove is former Giant Adam Treloar. While his bank balance will be happy with his move south, he might be a little displeased at how well the Giants are going while he languishes as a standout in an ordinary team.

You can bet he will want to have a huge game against his former teammates, who will no doubt remind him what a bad decision he made.

Hopefully big forward Travis Cloke can rediscover some of the form he produced when these two sides met in round 11 last season.

He booted five goals in that match – his last dominant performance for the club.

His best return in a single match in 13 games since then has been just two goals.

But he has been building since returning to the side after being dumped to the VFL. Yes, we know he didn’t kick a goal against the Blues, but he did take nine marks and gather 13 possessions.

He should have done enough to hold his spot and, if he gets the opportunity, is worth a go in the first goalscorer markets at $14.

If you’re looking for an outsider, Treloar might be the pick. He will be going hard early and could get off the leash and bob up with the first of the match at $26.

As we said, it’s not about if, but how much the Giants will win by. They have turned Spotless Stadium into a fortress and have been absolutely smashing teams there. The Pies, while on a hiding to nothing and having won two straight, have almost no chance here. Greater Western Sydney have class across all lines, and are too skilled, slick and motivated to drop this one. We reckon 10 goals is a big chance and the 60-plus market is worth a look at $2.70.