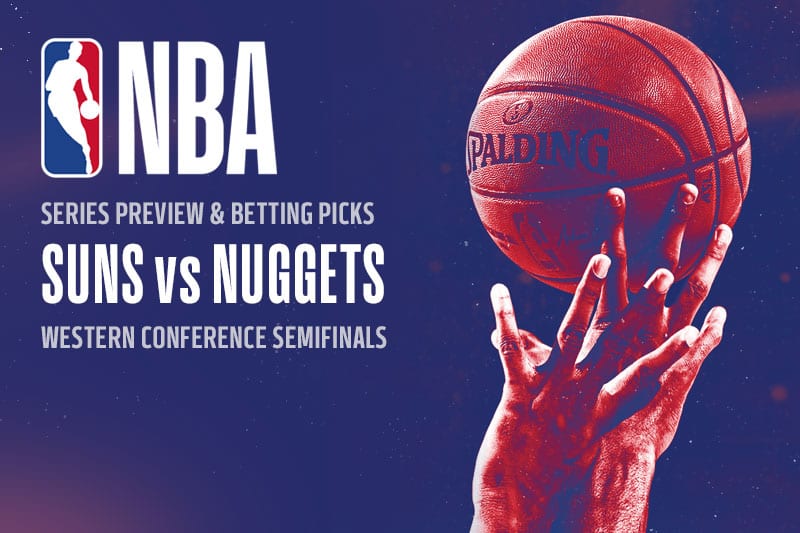 Having knocked off the defending champion Los Angeles Lakers, the Phoenix Suns will now face the Denver Nuggets in the NBA Western Conference semifinals. Check out our NBA betting preview and top tips for the series ahead of Game 1, which is slated for Tuesday, June 8 (AEST) at Talking Stick Resort Arena in Phoenix, Arizona.

The Phoenix Suns (55-23) appeared to be on the ropes when they lost Games 2 and 3 to the Lakers to fall to 1-2 in the first round of the NBA Playoffs, but things turned around in Game 4 – especially after Lakers star Anthony Davis injured his groin in the first half. Phoenix went on to win that game 100-92 and would finish up the series on a 3-0 run. Devin Booker scored 47 points and grabbed 11 rebounds in the decisive Game 6 victory and finished the series averaging 29.7 points per game.

Nikola Jokic led the Denver Nuggets (51-27) to a first-round series win over the Portland Trail Blazers. Jokic finished the six-game series with an average of 33.5 points and 10.5 rebounds per game and scored at least 34 points in five of those six games. The Nuggets lost Jamal Murray on April 12 with a torn ACL that will keep him out of this postseason and at least some of next year. Since Murray’s injury, Denver is 17-7 straight up and 12-12 against the spread including the 4-2 run in both of those metrics in the first round.

It’s a shame that the Nuggets aren’t healthy. This Denver team was a dark horse in the Western Conference this season after making the conference finals last year, and with a healthy Jamal Murray this matchup against Phoenix would be one heck of a series. But with the team’s second-best scorer out for this series and its fourth best scorer, Will Barton, banged up with a hamstring injury and expected to miss at least Game 1, the Nuggets probably don’t have the depth to beat a team as good as the Suns.

Phoenix received a break in the form of Anthony Davis’s injury and are also fortunate to have Chris Paul back at full strength after the veteran point guard was struggling with a shoulder injury early in the series. The Suns are healthy and playing well at the right time of the year, so look for them to punch their ticket into the Western Conference finals for the first time since 2010.