Rugby League has a long and storied history in Australia as one of the country’s most popular and endearing sports.

Whether it is at the club level, national selection or the brutal State of Origin series, few sports display the gladiatorial style of determination, skill and physicality that the NRL does.

However, like every sport, some names have emerged from the pack over the years and have risen to the top, illustrating why the game is so great.

The team at BettingSite.com.au has compiled a list of the 10 greatest NRL players of all-time (in no particular order) for your reading pleasure.

The men on this list encapsulate the essence of the game and transcended the sport itself, with each man leaving a lasting imprint on the Australian sporting landscape.

It seems impossible now to think that Johnathan Thurston was once deemed too small for rugby league and was knocked back by several clubs even when he offered to play for free.

The Canterbury Bulldogs eventually took a punt on the diminutive Queenslander, but it wasn’t until he signed for the Cowboys in 2005 that the scope of his talents became apparent.

Thurston won the Dally M Medal four times – an all-time record – and achieved an impressive treble in 2015 when he led North Queensland to their first-ever NRL flag and won both the Dally M and the Clive Churchill Medal.

‘JT’ was also instrumental in Queensland’s 11 State of Origin wins between 2005 and 2017, forming part of the ‘Big Four’ alongside Copper Cronk, Billy Slater and Cameron Smith. 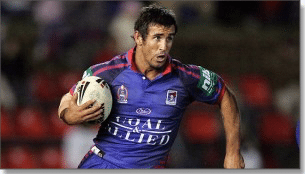 No man personifies the modern game of rugby league quite like Andrew ‘Joey’ Johns.

From the moment he came onto the scene, Johns’ precision passing, intuitive play, hard-nosed style and innovative kicking game set him apart from all the other halfbacks in the league.

With just about every individual award a player could claim as well as some notable domestic and international records, including the highest individual point scorer in premiership history, the man they call ‘Joey’ has a record which speaks for itself.

Arguably Johns’ best accolade was being named the greatest player of the last 30 years by the esteemed Rugby League publication Rugby League Week.

Wally Lewis – or the King as he is affectionately known – is one of the most recognisable names in League history and is arguably the greatest player ever to take to the field.

During his career, the King embodied what it means to be a leader: fiercely competitive and exquisitely skilled, Lewis excelled at club level, but it was in the State of Origin arena that he really put his talents on display.

If being named as one of the Rugby League immortals was not enough, Wally Lewis’ legacy will forever be cemented in Queensland League folklore with a bronze statue of the King standing outside his beloved Lang Park.

Credited with redefining the role of the fullback, Churchill is undoubtedly one of the most influential figures the sport of League has seen in this country.

Winning five premierships with his beloved South Sydney Rabbitohs over the course of his 157 game career, his attacking flair and nous for the game paved the way for the modern attacking fullback, a pivotal part of contemporary Rugby League.

Churchill also went on to have success as a coach, steering the Rabbits to three premierships under his tenure.

One of the greatest Queensland players of all-time and potentially the best ever Melbourne Storm captain in history, Cam Smith’s record speaks for itself.

Smith’s placid demeanour and unathletic body type are probably more akin to an office worker than the undisputed greatest Hooker of all-time, but that has not stopped the Melbourne Storm skipper from dominating the NRL for well over a decade.

The Storm captain is ice cold in almost every game situation, handles pressure like no other and has an uncanny ability to control a game like few we have seen before.

A future hall of famer if there ever was one, perhaps Smith’s greatest accolade came in 2007 when he was awarded the Golden Boot Award – given to the world’s best League player.

When it comes to the big names of Queensland State of Origin, not many have the accolades and credentials to take on Darren Lockyer.

Few players in League history have truly excelled in two separate positions like Lockyer, who was a magnificent fullback before changing to a more central play-making position, five-eighth, later in his career.

The man they call ‘Locky’ holds the all-time record for most NRL games played, most State of Origin matches, most games as captain and most tries for the Australian national team, as well as being the highest points scorer in Broncos’ franchise history.

With just about every individual award a man could win, including a Clive Churchill medal, three premiership wins with Brisbane, a record six consecutive State of Origin wins with Queensland and the 2006 Golden Boot award, Lockyer is without question one of the most decorated and special players to have ever graced the field.

Few players in sporting history have had the profound impact across two nations as Brian Bevan for both Australia and Britain.

Bevan forged a name for himself over the 40s, 50s and 60s where he became the only player in Rugby League history to be inducted into the Australian Hall of Fame and the British Hall of Fame.

Known as the ‘Wing Wizard’ he was named in the Australian team of the century on the wing, and was the only player in the team who did not actually represent Australia at the national level.

Few men in sport around the world have a more fitting name than Glenn Lazarus.

Lazarus was a one-man wrecking crew in the forward pack, and is the only man in League history to win premierships with three different clubs (Canberra Raiders, Brisbane Broncos and Melbourne Storm).

The man they call ‘the brick with eyes’ was a feared commodity out on the field and led by example through his maniacal attack on the man with the ball.

Lazarus gave all for his state and country and was twice named the Players’ Player on two successive Australian representative tours, in 1990 and 1994.

Lazarus is also a member of the Bronco’s Hall of Fame and has a stand named after him at Olympic Park in Melbourne, which highlights the impact the man had at two different clubs.

Rated amongst the greatest lock-forwards the sport of Rugby League has ever produced, Johnny Raper is widely heralded by some as the greatest player ever to play the game.

The man they call ‘Chook’ took to the field with an intensity that was often unrivalled and feared.

A relentless and ruthless attitude is what set Raper apart from the rest and, with a list of achievements that is coveted, it is not hard to see why ‘Chook’ stands among the immortals of Rugby League.

Reginald ‘Reg’ Gasnier has been described as the ultimate all-round player and is considered one of the best centres of all-time.

Gasnier played in a then record 36 tests for Australia and captained the National team on eight occasions from 1962-67.

Reg is a member of the Rugby League Team of the Century, an inductee in the Australian Sporting Hall of Fame and he has been awarded an Order of Australia.

Gasnier was also one of the four inaugural immortal inductees in the Rugby League Hall of Fame, solidifying his place in the sport’s folklore.