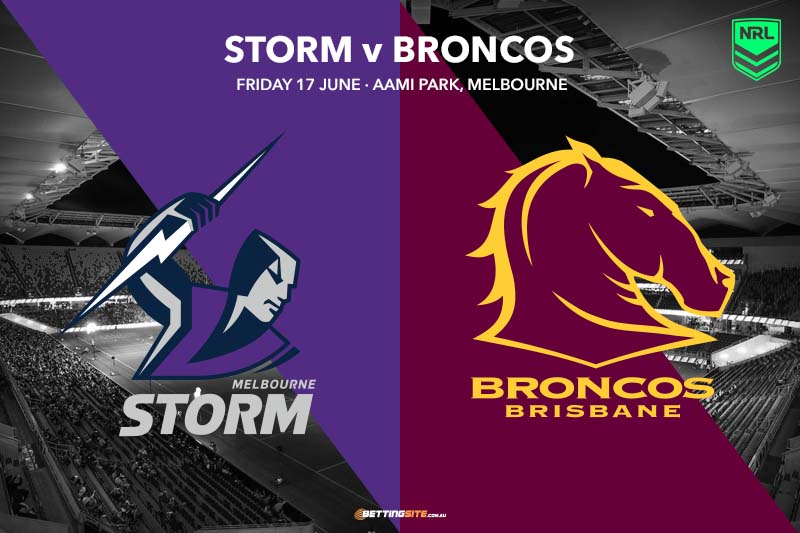 A battered Brisbane Broncos will travel south to Melbourne to take on the Storm. The Broncos are looking to win their 8th match in a row as the club soars to heights they haven’t seen in years. However, Melbourne is horrible hunting ground historically, having only won three of twelve games at Aami Park. The Storm on the other hand will be looking to get their third win in a row and continue to push for the top of the 2022 NRL ladder.

Ryan Papenhuyzen was named for the Storm on the extended bench, striking fear in the hearts of Broncos fans everywhere. Papenhuyzen has since been ruled out of the game with Covid. The Brisbane Broncos will be without halfback Adam Reynolds, centre Herbie Farnworth and impact bench player Cory Paix through injury. Kurt Capewell and Kotoni Staggs return to the side as a boost for the Broncos, but will it be enough to take down Melbourne?

The Melbourne Storm have every right to be heavy favourites for Friday’s clash as they’ve won 36 of their 50 games, with one draw. The Broncos do have key troops missing, and the Storm have won the last two games by a total of 80-18. However, the Storm have had the services of Nicho Hynes, Ryan Papenhuyzen and Josh Addo-Carr in those wins. The Broncos also bring a much strong defensive work ethic into this clash, and given a 15.5+ point head start, should be able to stay within striking distance of the Storm at $2.

Justin Olam recently resigned with the Melbourne Storm for another three years and has been one of the clubs best outside backs for a long time. This season alone Olam has scored 6 tries, assisted on one, broken the defensive line nine times and busted a ridiculous 60 tackles. Olam will be running at right centre for Brisbane Staggs, who has only just overcome a shoulder injury sustained in State of Origin One. Look for Olam to cross the line at any time during the match paying $2.20 with Palmerbet.

Selwyn Cobbo will be returning from his State of Origin debut for Queensland on Friday and is expected to be straight back to his terrifying best. The Storm are without a noted high flying winger to defend Cobbo, and although Adam Reynolds is not in the side to take full advantage of this, the Broncos game plan will definitely be targeting their big representative winger. Cobbo is a great value play to score at any time during the match paying $2.55.

With both sides missing plenty of their offensive weapons heading into this clash, and given the prediction of a relatively close game, the total points market for this match will be one worth playing in. Add into the equation of wet weather being predicted for Melbourne on Friday, and the days leading into Friday, this match should fall below the total match points of 42.5 paying $1.90 with Betfair.

This mouth watering five-eighth battle will be one of the master and the apprentice. Cameron Munster is one of the most devastating attacking players in rugby league on his day, and his been in incredible form in recent weeks. On the other hand, Ezra Mam has demonstrated in a short period of time the potential to be of a similar calibre to Munster. Casting an eye over the team lists for these two sides, it will be Munster for the Storm or Mam for the Broncos who goes on to break this game open and seal a win for their side.