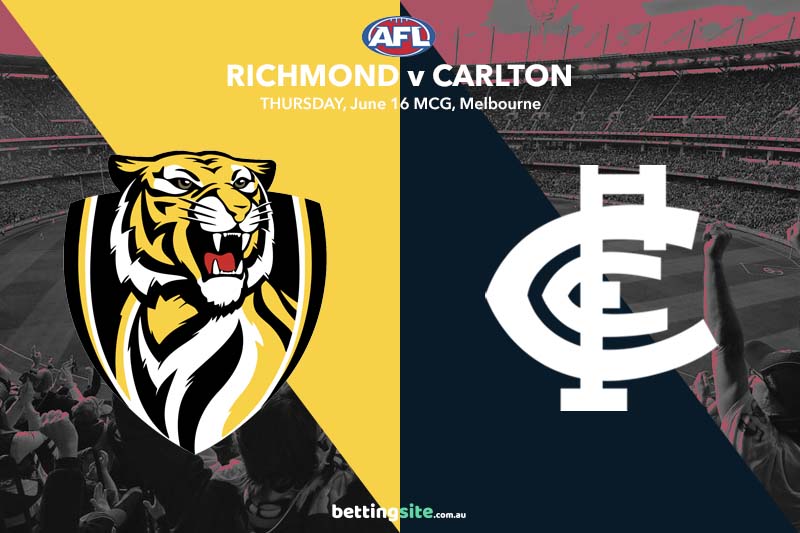 Richmond is a narrow favourite to defeat Carlton in their AFL round 14 clash at the MCG on Thursday night.

The Blues took home bragging rights against the Tigers in round one earlier in the year, but can they muster up another against a team that has improved markedly since then.

Tigers coach Damian Hardwick will just about have a full list of players to select this week, as the only injuries heading into this contest will be Tom Lynch and Dustin Martin, who are both expected to play.

On the other hand, the Blues are getting decimated by injuries every week and will need to dig deep in order to stay competitive.

The loss of Caleb Marchbank upon his long-awaited return leaves a big void in the backline, as the Blues are still without Jacob Weitering, Oscar McDonald, Luke Parks and Zac Williams, while Adam Cerra has also been added to the long injury list with his recent hamstring strain.

Although Michael Voss was forced to pull some bold moves last weekend, Carlton still did enough to knock off the Bombers in their 150-year commemorative match.

The Tigers also won in their round 13 matchup despite coughing up the lead early in the fourth quarter, ultimately holding off the Power by 12-points at the MCG.

No player for either side loves this matchup more than Patrick Cripps, as the Carlton skipper has averaged over 30 disposals in his last four matches with the Tigers. Dion Prestia may not have the same form as Cripps heading into this contest, but he still enjoys playing against the Blues. Prestia racked up 35 disposals back in 2019 against the Carlton, which stands as one of the best matches the former Sun has put together.
Winning the ball out of the midfield will be crucial to winning this contest overall, which is why you need to keep an eye on Patrick Cripps. Crippa put together 30 disposals and three goals in round one and could easily replicate that effort here.

Injuries down back have hindered the Blues dearly, but they still have so much firepower in the midfield and up forward. The twin towers of Harry McKay and Charlie Curnow are easily one of the most damaging duos in the AFL, while the midfield mix of Patrick Cripps, Sam Walsh, George Hewett and Matthew Kennedy is absolutely lethal. The Blues are paying $2.50 with Australian bookmakers to win by 1-39 points.

The Tigers do not have a big-bodied midfielder with the experience to run with Cripps at the stoppages, which is exactly how he racked up 30 in round one. Cripps was simply too big and too strong for the Tigers earlier in the year, and now that Adam Cerra is on the sidelines, the skipper will have more work to do in the middle, subsequently resulting in more disposal opportunities.

We are backing in the Blues to take out the Tigers for the second time this season, as Patrick Cripps should lead the way in the midfield and put on a clinical display. Shai Bolton managed to kick 0.5 last week, so we expect a quick bounce back from the young star.