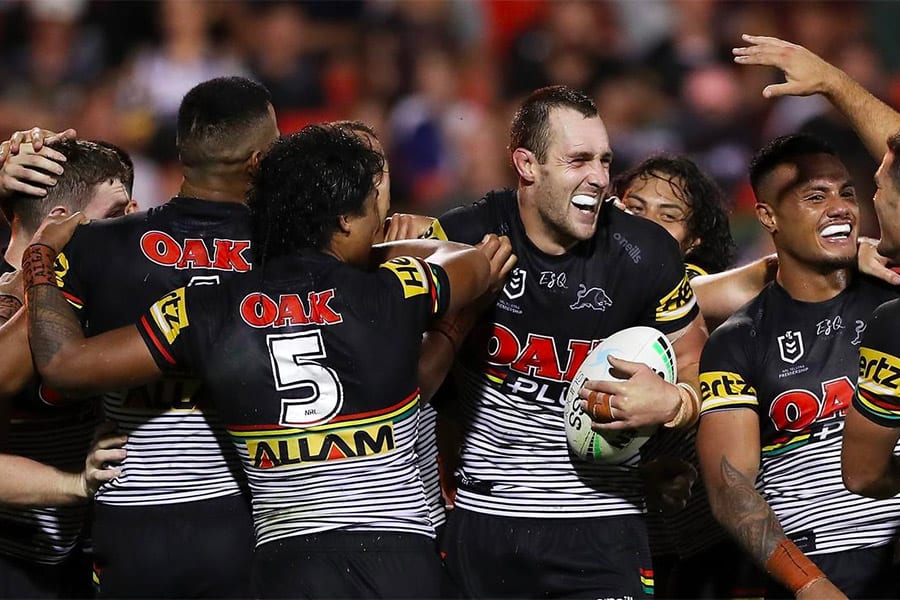 With seven rounds of the 2022 NRL Premiership remaining before the finals, how is your team looking? Are they still in the race?

It would seem impossible for last year’s premiers not to finish with the 2022 minor premiership, as Penrith have lost just one game so far this season.

The Panthers are cruising at the top of the ladder, eight points ahead of North Queensland and Cronulla who share second spot on 26 points.

But the top four — and even the top eight — could quite easily be decided by results in the very last games of round 25 for places in the first week of September.

The only sure thing is, barring some horrendous injuries, Penrith will take out the minor premiership again.

As it stands heading into round 19 tonight there are 10 teams still with a chance to finish in the top four.

North Queensland and Cronulla share second and third on 26 points, while the 11th-placed St George Illawarra Dragons sit on 18 points.

Melbourne, Brisbane, and Parramatta are locked on 24 points, with five more teams within six points of the top four.

It sets up a cracking finale to the season, especially for fans supporting 11 of the 16 teams still jostling for places in the top eight.

The NRL has some potential last-round blockbusters on its hands should things go down to the wire.

The final round kicks off with Parramatta hosting Melbourne Storm, who by then could be fighting for a top-four finish.

The same could be said for the Sydney Roosters and South Sydney, who clash before the biggest game of the round when North Queensland host Penrith in what could be a high-stakes game for the Cowboys as they look to lock down second spot and a double chance in the finals.

It’s a Hollywood script with a Hitchcock finish.

History tells us it is near impossible to win the NRL Grand Final if you finish outside the top four.

Brisbane finished the minor premiership in fifth place in 1993 but went on to win the title that year, and Parramatta achieved the feat in 1995.

The Penrith Panthers enjoyed the luxury of resting seven players against the bottom-placed Wests Tigers last weekend and still won, which shows the depth and confidence within the club.

The same, though, can’t be said for Melbourne Storm, who are struggling having lost three games in a row for the first time in seven years last weekend.

That’s the difference at this time of the year: the Panthers are flying while a club that has set the standard for many years is battling to find its best form less than two months out from the finals — a worrying sign for Storm coach Craig Bellamy.

In summary, 11 teams remain in contention for the September playoffs, down to the Dragons on 18 points.

Let’s take a quick look at a few of the top teams’ chances of taking out the 2022 title.

The Panthers are clearly the best team at the moment in the competition, but they have had a tough run through the State of Origin series and need to avoid any major injuries to a core group that has had the benefit of being able to play together all season. Nathan Cleary runs the show brilliantly when his forwards do the heavy lifting and they have so many quality players they are difficult to defend for 80 minutes. They also have a remarkable defensive record, conceding just 12 points a game while themselves averaging 31.25. Going back-to-back is tough to do. Only two teams, Brisbane (1992-93) and more recently the Sydney Roosters (2018-19) have been able to achieve the double in the past 30 years.

The Cowboys are equal second and playing some impressive attacking football. Coach Todd Payten has found the key with a couple of astute off-season signings, including Chad Townsend and Tom Dearden, plus the emergence of some promising young stars in Jeremiah Nanai, Tom Gilbert, Reuben Cotter, Scott Drinkwater, and the flying Hamiso Tabuai-Fidow. While not as efficient as Penrith, the Cowboys are working on their attack and defence in the second half of the season after forging some very good combinations in the halves and with their exciting young forwards. They have turned the clock back to 2015 when, with Johnathan Thurston leading the way, they pipped Brisbane in one of the great grand finals. The Cowboys play four of their remaining games away and confront Penrith in the final round, when the Panthers could possibly rest a host of players.

When the Sharks get into their rhythm and play their style of game, they can be very tough to beat. They produced some impressive performances during the season and could be a finals dark-horse against a side like Penrith. With Matt Moylan, Nicho Hynes, Will Kennedy and Jesse Ramien all firing in attack, their strong pack led by the likes of Andrew Fifita, Aiden Tolman, Braden Hamlin-Uele, Siosifa Talaki, Toby Rudolf, and Wade Graham is a tough, hardened, experienced unit with the right mix to win pressure games. There’s a look and a feel about the Sharks that was evident in 2016 when they toughed out a historic 14-12 maiden grand final win over Melbourne, who were heavy favourites – just like Penrith are this year.

Kevin Walters has done a superb job since taking the reins of the club where he won five premierships as a player. After a shaky start, Walters has transformed Brisbane from a team that struggled to go the distance into a team that now fights to the end. The addition of experienced organiser Adam Reynolds has provided Brisbane with a strategic kicking game and an on-field general, while the emergence of a host of promising young players in Selwyn Cobbo, Ezra Mam, Tesi Niu, and forwards Pat Carrigan and Zac Hosking has made a big impact on the Broncos, who were cellar dwellers in 15th place in 2020 and 2021. This year they have strung together several wins, displaying the brand of football the club is renowned for. Provided Reynolds stays fit and Payne Haas and Carrigan lead the forwards up the middle, Brisbane will play finals football in 2022.