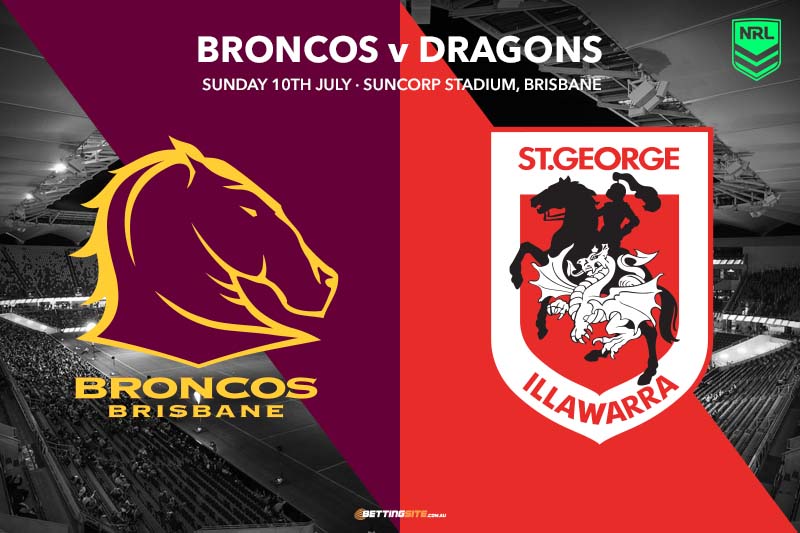 The Brisbane Broncos will close out Round 17 when they host a confident St George-Illawarra Dragons outfit, on what will be a huge match for both NRL clubs at Suncorp Stadium on Sunday afternoon. The Dragons currently sit in 8th spot and get a great chance to cement their Finals position with an understrength Broncos set to take the field.

Brisbane’s tough mid-season run has coincided with a return of the Baby Broncos. It’s been a year since a Brisbane Broncos side was this decimated due to the combination of State Of Origin selection and injury, yet they’re somehow the favourite in head-to-head betting at $1.78. Having Adam Reynolds in the side, while Ben Hunt will be missing for the Dragons might be giving the punters too much confidence in the Broncos. Reynolds is a fantastic halfback and been a key figure in their rise, but at some point the cattle missing around him is going to matter. Brisbane will be without Selwyn Cobbo, Te Maire Martin, Kurt Capewell, Tom Flegler, Corey Jensen, Patrick Carrigan and Payne Haas. That is half of their starting side while the Dragons will only have to cover for the absence of their star halfback.

Their starting forward pack is unrecognisable, to the point where debutant Zac Hosking doesn’t even have a profile picture on the NRL’s website. They’re being forced to call in any reinforcements possible and that never bodes well for a team.

Coming off two losses, taking Brisbane as a favourite this week doesn’t feel like a smart investment. Corey Oates at $1.98 will be the correct and most popular pick for an any time tryscorer, while Ezra Mam at $4.80 shapes up nicely as the value selection with the top bookmakers.

The St George Illawarra Dragons had barely anyone select them in their Top Eight this year, but we are past the halfway point of the season and they’ve more than earned their spot.

They aren’t a team that excite the casual fan, but they get the job done most weeks by just by getting into the grind and winning the close games
Evidence of that is having five wins by single digits and just two losses, one of which was against Penrith and the other in Golden Point.

A big key in those close games has been the composure of Ben Hunt and crucially they will be missing him, so Jayden Sullivan as his replacement has a big role to play.

The weather conditions in Wollongong suited their game and personnel perfectly last week, while the conditions and opposition at Suncorp Stadium will mean they almost certainly have to produce at least four tries to win the game. Can they do that without their star halfback or will the mass exodus of players for Brisbane make Hunt’s absence a little easier to overcome?

The Saints at the 1-12 margin are $3.05 with Palmerbet and that feels like where the result will fall.

Cody Ramsay at $2.90 is a great bet to get on the tryscorers list with his improved play at fullback, while Andrew McCullough at $5.25 is worth a flutter. ‘Macca’ absolutely loves having a dart from close range and even though every team knows it’s coming, he can still find his way to the line.

Ezra Mam and Talatau Amone are both talented five-eighths who possess a terrific running game and if the game opens up, fans can expect both men to have a huge say on the outcome of the game.

The Saints get up for the second week in a row as an underdog at the 1-12 point margin. Crucially, they will be tied on the same amount of wins as the Broncos come dinner time on Sunday evening, which will make the race to the Finals exciting.

Saints 1-12 with Cody Ramsay, Corey Oates and Talatau Amone all scoring a try pays a whopping $56 at Ladbrokes.