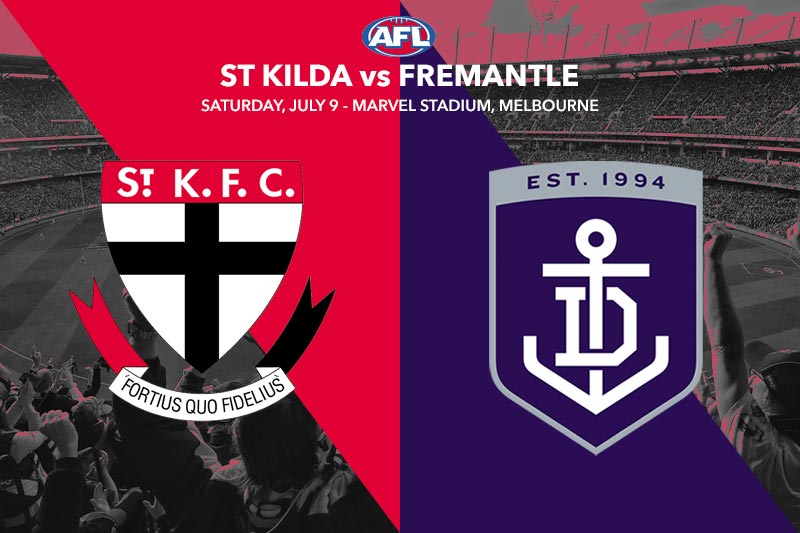 According to the latest AFL betting odds, Saturday’s clash between St Kilda and Fremantle at Marvel Stadium is one of the hardest to pick in round 17.

On initial examination this game had us somewhat perplexed. Both teams seem to have the same weaknesses. St Kilda managed to arrest their slide with a fortunate win over the Blues in round 16 to keep their finals hopes alive. That good fortune extended to losses for the Suns, Power, and Bulldogs, giving the Saints a buffer to the teams hunting their ladder position.

At their best, the Saints are capable of playing solid football but have a tendency to fall into a scoring slump that cruels their winning chances. Against the Blues they spread the scoring load and found new targets inside 50, instead of focusing exclusively on the height of Max King. This might be the key to rectifying their inconsistent form.

Fremantle flexed their muscles in the second and third quarters against a desperate Port Adelaide in round 16 and thereby held onto their contested ladder spot. The Dockers have a strong home record, but we can’t ignore their apparent inability to win on the road.

Much like the Saints, Freo can just go cold during a game and barely trouble the scorer for extended periods. Against the Power, the Dockers were able to find eight separate goalkickers – including Rory Lobb, who booted 5.1. This type of attack is almost impossible to defend, so the winner of this game will be the side that can find the most routes to goal.

Saints midfielder Jack Steele is instrumental to the team’s winning chances. He was noticeably absent during some of St Kilda’s worst efforts and boasts some elite 2022 stats. Steele is averaging 27.5 disposals, 5.0 clearances, and a huge 6.9 tackles this season. He is like an insistent tagger who shuts down key opponents, yet he simultaneously wins a heap of the ball.

Fremantle gun Andrew Brayshaw is having a monstrous year. The 22-year-old can be seen at the top of Brownlow Medal betting markets alongside names like Lachie Neale and Clayton Oliver. Brayshaw is averaging 30.5 disposals, 4.7 clearances, and 6.2 tackles across 15 matches this season. His ball-use is silky smooth, and Brayshaw kicks more than he handpasses, setting up his recipient with time and space to move.

This midfield matchup looms as a potential game-changer.

This is a tricky match to judge, but we have arrived at a solid play. The Saints are slight favourites, with the skinniest of lines at 1.5 points. We are pleasantly surprised by the total game line, though, which is set at 159.5 points. We are very happy to take the unders on that. The chances that both these sides kick a decent total are incalculable. Freo could conceivably post 60 points and win, so this looks like a no-brainer. The last time these sides met they combined to kick 120 points. So, take the unders and look to link the bet across the round as an anchor for other selections.

With expectations of a low-scoring game, we will be focussing our value binoculars on some disposals markets to boost your overall return. We will link total game points under 159.5, into Bradley Hill 20+ disposals, into Will Brodie 25+ disposals, into Michael Frederick anytime goalkicker. This bold combo will return $5.63 courtesy of Ladbrokes.