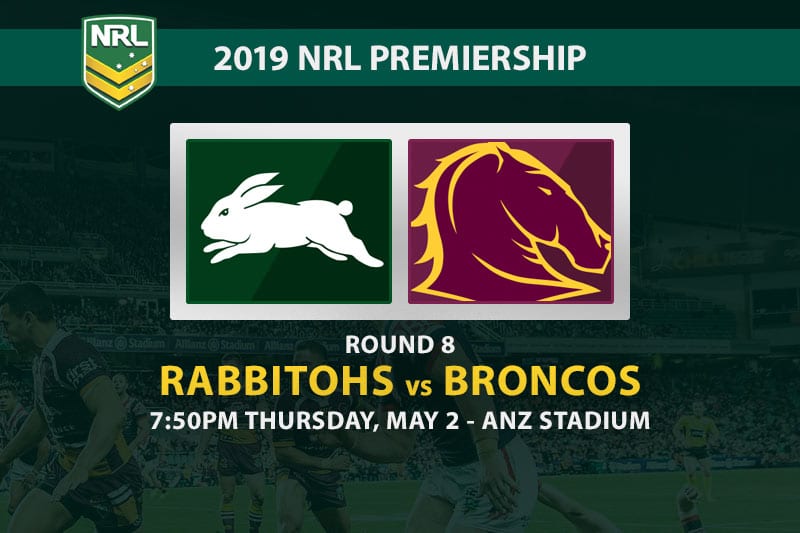 It was pencilled in as a must-watch fixture at the start of the 2019 NRL season, but Thursday’s clash at ANZ Stadium sees two teams in very different situations.

Despite some scratchy displays in the last few weeks, the South Sydney Rabbitohs have dropped only one game – and by golden point, at that – in seven rounds.

Penrith gave them an almighty run for their money last time out, but Wayne Bennett’s men held firm to claim a well-earned 22-18 victory at Panthers Stadium.

The Bunnies are sticking with the same 17 this week, although George Burgess could slide to the bench to make room for Tevita Tatola at prop.

Anthony Seibold led Souths to the top four last year, but he has had a tough time of it since his much-discussed switch to Red Hill in the off-season.

The Brisbane Broncos had lost five of their first six games before clinching a morale-boosting win over Cronulla in round seven.

It wasn’t all good news, however, with Kodi Nikorima sustaining a calf injury that will keep him out of the side this week.

Teen prospect Tom Dearden comes in at halfback for his NRL debut, but otherwise there are no changes to the team that downed the Sharks.

It is tough to ignore the favourite when he has failed to score a try in only two out of seven games this season. He might be getting more attention than he was in round one, but Graham remains the main threat in South Sydney’s back half.

Oates is in terrific scoring form this season and delivered the goods last week with the opening try inside eight minutes. The Rabbitohs’ outside players will have to be on their guard to keep him quiet.

Brisbane’s big win last time out adds a bit of sporting interest to what was shaping up as a potentially one-sided affair.

Before Broncos fans get too excited, we should remember that their 29-10 win over North Queensland in round two ushered in a streak of four consecutive defeats.

Aside from the coach’s boxes, the key battle will play out on the front lines.

Bennett has the Souths forward pack looking very solid, which has allowed the likes of Adam Reynolds and Cody Walker to showcase their creative talents from the halves.

The jury is still out on Brisbane’s stopping power against the better teams, so back the home side to go 7-1.