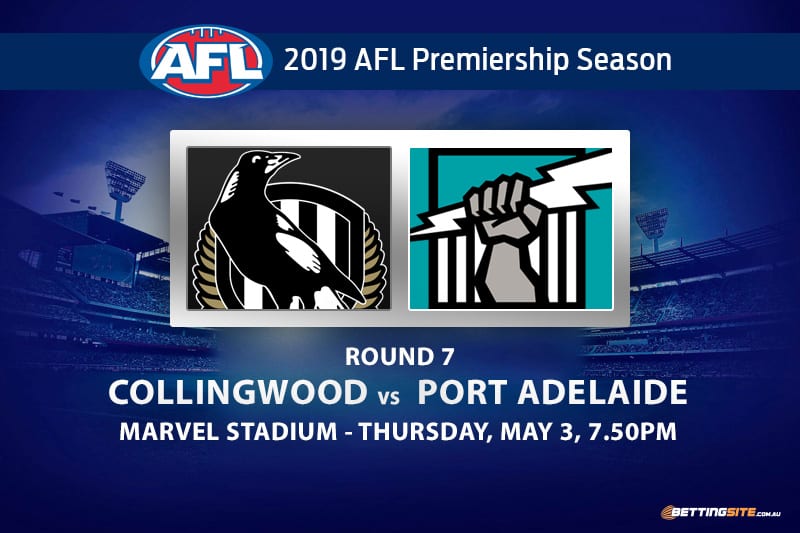 Is Collingwood too short in AFL flag betting?

Two top eight sides will face off at Marvel Stadium in a Friday night blockbuster.

2018 AFL runners up, Collingwood, will host the revitalised Port Adelaide Power under the roof in a game that will could provide a great guide about the September ambitions of both sides..

The Magpies and Power are tied on four wins for the season after six weeks and look destined for finals, particularly the Magpies, who lead some premiership betting markets.

Ken Hinkley, head coach of the Power, has unearthed a handful of rookies this season and it has worked to perfection.

The youth have provided plenty of energy and urgency early in their careers.

Nathan Buckley will need to make some hard decisions at selection this week, as the American Pie, Mason Cox, is out and a few good players are pushing for selection.

Jamie Elliott will return for the Pies and Ben Reid looks likely to fill the void Cox leaves.

The Port Adelaide boys did not overcome the Magpies last season, but had beaten Friday night’s opponent four times in a row before 2018.

With Robbie Gray out for the Power, it could be a hurdle too large to overcome, but stranger things have happened.

Every star player has a team that they always play well against, and for Steele Sidebottom, that team is Port Adelaide. Due to his middling season to date, the odds for Sidebottom to have a blinder have increased dramatically compared to previous seasons. $1.62 to get 25 touches is the best odds Sidebottom has been given since he was 20 years old.

The captain of the Port Adelaide Power has returned from his shoulder injury and looks hungry to win. Travis Boak and Tom Rockliff have been exceptional in Wines’ absence, but now that he has returned, it will be time for the old boys to make room for the young bull. Wines had 29 touches against Collingwood last season, which was a team high. Expect a big week from the inside-midfielder as he makes a statement.

It was evident that the Pies were not kicking straight last week, which gave the Bombers a sniff and nearly cost them the match. Against the Power, who may be without Tom Jonas, it would be disappointing if the Magpies’ dynamic forwards didn’t exceed 13 goals.

The Collingwood backline has been the third most efficient this season, only conceding 71-points per match, which includes games against the stacked West Coast Eagles and Geelong Cats. With Robbie Gray not buzzing around in the forward 50, the Power will find it difficult to match the Pies in the air and at ground level.

In their most recent match, the Pies ran out as 51-point winners, which will happen again at Marvel Stadium this Friday. The Pies have the better midfield, more dangerous forward line and more experienced backline, all pointing towards a hefty win to the Magpies.

Collingwood has more firepower on its list and can easily defeat the Power. The absence of Robbie Gray and Tom Jonas is bigger than you may think — he always kicks a large bag against the Pies, who will enjoy his absence greatly.