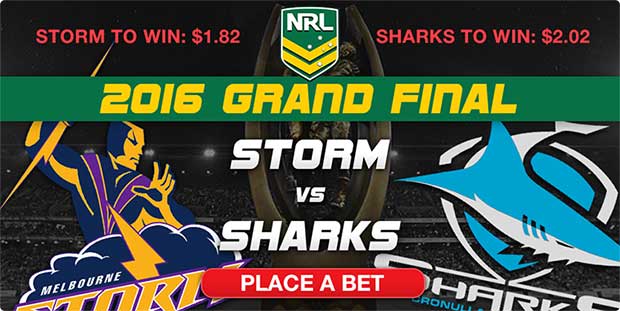 NRL supremacy is on the line at ANZ Stadium on Sunday night as the juggernaut that is the Melbourne Storm try to win yet another NRL GrandFinal against a Cronulla Sharks franchise that is seeking its first ever title.

The Storm have been there, done that, and that gives them plenty of experience for the big occasion which will help, but if the Sharks are ever going to win that elusive premiership, it has to come now.

Inspirational captain Paul Gallen will give the Sharks a big mental boost after missing him towards the end of the regular season. Since his return the Sharks have been stellar in beating the Raiders away from home and last year’s champions, the North Queensland Cowboys, last week.

The Storm also defeated the Raiders and the Cowboys en route to the grand final, which sets up a great game.

Punters can double their winnings (up to $50 in bonus bets) if you take a head-to-head bet on the Storm vs. Sharks at Crownbet.com.au.

The Storm and the Sharks have made loyal punters some good money this season, but for one side that will come to a halt on Sunday night.

The betting market hasn’t changed much since it opened last week. The Storm opened as $1.78 favourites which was to be expected given the experience that team has, but bookmakers have had to trim the market as support continues to come for the Sharks.

The Sharks opened around $2.20 and have been bet into even money, which doesn’t appear to be the worst bet in the world.

There might not be that premiership-winning experience with most of the Sharks players, but they possess a combination of wise heads and youthful enterprise. Paul Gallen, Luke Lewis and Michael Ennis provide the experience for the Sharks which couples well with the excitement of Ben Barba, Jack Bird and Valentine Holmes.

The latter three players might be overawed by the occasion, which is the main concern for punters backing the Sharks, but we’re expecting the Sharks as a whole to be switched on for the final.

There are some negatives for the Sharks that punters need to be aware of. They lost 26-6 the last time they played the Storm and its record at ANZ Stadium consists of only seven wins from 22 games.

The Storm has a great record in Sydney considered the overall record of non-Sydney teams at ANZ Stadium. They have won 12 from 17 games played there and with an overall season record of 21 from 26, they look tough to get past on Sunday.

$1.83 at Sportsbet for a side which has won multiple NRL premierships is a great price and when you have Cooper Cronk and Cameron Smith in the side, it’s tough to find any negatives.

In fact, we can’t find any negatives for the Storm on Sunday. They are strong offensively and defensively, giving up totals of only 6, 10 and 12 in the last three games. The Sharks, on the other hand, gave up totals of 26, 14 and 20.

A close game is expected on Sunday night and the Sharks certainly seem to have the x-factor this season, but we’re going with winning experience and the Melbourne Storm have that in numbers.

The Clive Churchill Medal is given to the player who performs best in the NRL Grand Final according to a panel of judges.

Storm stalwarts Cooper Cronk and Cameron Smith are at the top of the Clive Churchill Medal betting and with good reason.

If the Storm are to win the game it will likely be because of either Cronk or Smith. They control the game better than any two players in the NRL with Cooper Cronk even adding a try-scoring threat to his arsenal.

Both players are at $6 to win the medal with Sharks play maker James Maloney on the second line of betting at $9.

Maloney didn’t have much success when he played for the New Zealand Warriors, but since being acquired by the Sharks, Maloney has become a much better player. He likes to run the ball to the line which makes him a try scoring threat and if the Sharks win he could be their best.