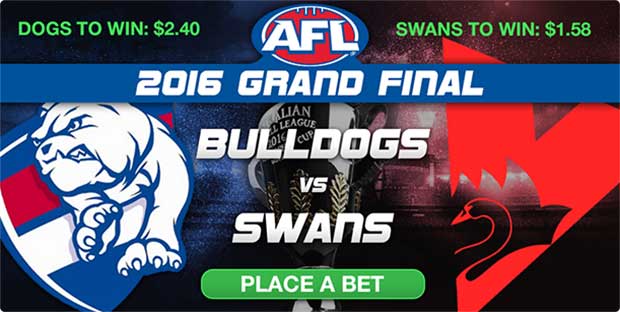 ONE of the all-time great AFL seasons comes down to a clash between top-of-the table Sydney raiders the Swans up against a side hoping to end a premiership hoodoo that dates back to 1954.

The Bulldogs have been the talk of the AFL, surviving virtual elimination finals in each of three weeks to book their date with the Swans on the MCG.

First they made one of the toughest trips in football and embarrassed the West Coast Eagles on their home deck in Perth.

Then they unbelievably ended the dominant reign of the three-peat Hawks, unceremoniously dumping them out of the finals in the semis.

The run was supposed to end at the Preliminary final stage, but the Dogs had other ideas on the weekend, riding a Luke Dahlhaus special and four-goal efforts from Clay Smith and Tory Dickson to win their way through to the grand final.

It was one of the best games of the year, with neither side able to pull away, the Dogs fighting back from positions where they looked shot twice in the last quarter to hold on for a one goal win.

Dahlhaus has spectacular with 32 disposals, leading a very even midfield brigade that featured seven men who gathered between 23 and 26 touches.

While Dickson and Smith – who has had an emotional week and is our pick for the first goal for the Dogs – were the stars in front of the sticks, a pair of snaps from Zayne Cordy kept the Dogs in it and much-maligned forward Tom Boyd might have played his most important game for the Dogs – not as a forward, but in the ruck, battling big Shane Mumford when Jordan Roughead went down with injury.

Sydney needed a wake up call in the first qualifying final to really kick into gear in this series and, after the loss to Greater Western Sydney, they reacted savagely, blowing away Adelaide and the Geelong.

Against the Cats, the Swans were simply ruthless, slamming on seven goals in the opening term to effectively kill off the game, stunning the shell-shocked Geelong faithful with a 37-point win.

The Swans overcame a pair of 39 disposal efforts from Cats stars Joel Selwood and Patrick Dangerfield, Dan Hannebery leading the way with 29 and Isaac Heaney 28.

Young buck Tom Papley was again the hero, booting three goals and you could do worse than him to bag the first.

Overall history is against the Dogs, but not the recent stuff.

The Bulldogs have won the last two clashes between the two sides – both by just four points.

Earlier this season, it took a last minute goal from hero Jason Johanissen to split them on the SCG.

The Dogs assembled at Whitten Oval yesterday to meet a throng of media and catch up with fans eager to get a glimpse of their would-be premiership heroes.

There is a buzz about the place like never before and fans, past players and even casual supporters across Melbourne are rooting for a red, white and blue victory.

But the men north of the border will be coming to Melbourne with a mountain of support – and a spread of midfield and forward firepower that is unequaled in the competition.

There are two schools of thought here.

The first is that the Dogs are legit and are set to continue their never-give-up attitude and push the Swans all the way.

The other is that they may have just played their grand final on the weekend against Greater Western Sydney, having to try up until the last moment on a road trip north, while the Swans easily accounted for Geelong, able to conserve at times through the match.

We have ummed and ahh’d over this for the past few days and while it will be unpopular, we reckon the former will ring true and the Swans will blow the Dogs off the MCG.

The romantic in us hopes it goes the other way, but, here at BettingSite.com.au we don’t care for romanticism, we’re just worried about finding a good tip for our loyal readers.

And that tip on the AFL’s day of days is the Swans to win and win by a lot.

The Dogs are good, but we are struggling to see their midfield matching it with the likes of Kennedy, Parker, Hannebery, Jack, Heaney and Mitchell.

And who is going to play on Buddy and Co? Dale Morris will still be having nightmares over the towelings Lance has given him over the years and, if he gets going, the red and white army will be unstoppable.

We reckon the 11.5 point line is generous and you should scoop it up.