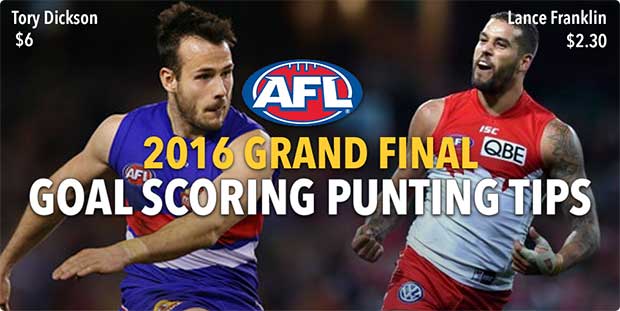 IT’S the unstoppable machine against the little team that could on Saturday as the Sydney Swans and the Western Bulldogs clash to decide who will win the 2016 premiership.

The Swans finished the season on top of the ladder, but had to do things the hard way after losing in week one of the finals to the GWS Giants.

The Swans bounced back in style the week after against the Crows, before shocking the Cats on the MCG to book their place in the 2016 grand final.

The Western Bulldogs 2016 finals campaign was anticipated to finish in the west after they were forced to travel to Perth to face the Eagles, but like so often this year they found a way to win under extreme adversity.

Heading into the finals the Dogs were $36 outsiders for the flag at Sportsbet.com.au, but they picked off their rivals one by one – including last year’s premiers Hawthorn and the flag favoured Giants – to book their place in the club’s first grand final in over 50 years.

Both teams have a multitude of attacking options inside forward 50 which bodes for an exciting contest, and as such we have taken a look at the goal scorer markets for Saturday’s decider.

Odds for the first goal scorer markets are provided by Sportsbet.com.au, which is offering clients money back up to $50 if their player fails to boot the first major but goes on to kick the second, third or fourth goal of the match.

The grand final invariably throws up a player who makes an unexpectedly-decisive impact, and what better impression is there than booting the first major on the MCG on grand final day?

Rohan has been a mercurial contributor for the Swans this season, popping up for matches of multiple goals on several different occasions this year.

Rohan possesses break-neck speed and has a keen goal sense, which includes the ability to nail majors from outside 50.

In all three finals for the Swans this post-season it has been a small that has kicked the first goal (Papley in the qualifying, Rohan in the semi and McGlynn in the preliminary) and we are backing the dynamic red head to emulate his semi-final feats on Saturday.

Gary Rohan is at $17 to kick the first goal in this year’s grand final at Sportsbet.com.au

Gary Rohan is $9.50 to kick the first goal of the match for the Sydney Swans at Sportsbet.com.au

While the first goal scorer market can be a tricky one to navigate, the most goals market is much easier to predict.

Between 2012 and 2015 a key forward has booted the most goals on grand final day.

Gunstan did it twice for the Hawks, Roughead once and Lance Franklin did it in brown and gold back in 2012.

No prizes for guessing who our selection for most goals this year is – Buddy Franklin loves the big stage and is at a surprisingly generous price for the most majors on Saturday.

Lance Franklin is $2.30 to kick the most goals in this year’s grand final at WilliamHill.com.au

Jake Stringer was uncharacteristically quiet in last week’s preliminary final win over the Giants, gathering just 11 possessions and failing to kick a major.

The grand final seems like the perfect stage for Stringer to explode, and last year’s All-Australian looks to be tremendous value to boot the first major of the match.

We think Stringer is the perfect player to get his team off to a red-hot start.

Jake Stringer is at $11 to kick the first goal in this year’s grand final at Sportsbet.com.au

Western Bulldogs sharpshooter Tory Dickson is our selection to boot the most majors for the red, white and blues on Saturday.

After a lacklustre season where his goal kicking production was well down, the former Bendigo Bomber has come alive, kicking the most goals for the match in two of the three finals the Dogs have played in.

Had it not been for some wayward kicking in the semi-final against Hawthorn, the 29-year-old could be heading into Saturday looking to make it four from four on the goal kicking tally.

Dickson is the logical choice for the Dogs to kick the most goals on Saturday.

Tory Dickson is $6 to kick the most goals in Saturday’s grand final at WilliamHill.com.au