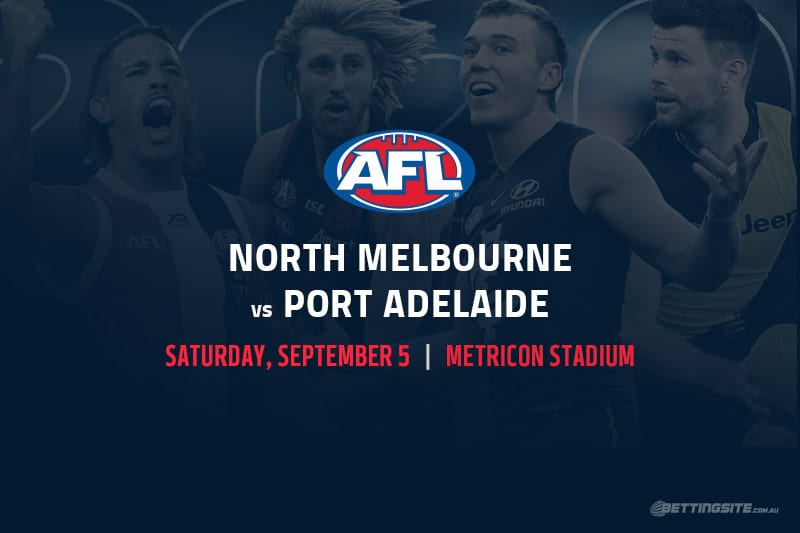 One of the most in-form teams in Port Adelaide travel to the Gold Coast, where the lowly ranked North Melbourne await on Saturday night to open up round 16.

The Kangaroos are coming off one of their worst performances for the season when absolutely dismantled by the Suns, and now they get a red-hot Power outfit coming off a workmanlike effort against the Swans last week.

Robbie Gray and Charlie Dixon will look to build on the form they showed last weekend and show some consistency in their games in the lead up to the finals.

Port Adelaide go inside 50 more than any other team and rank second for fewest inside 50s conceded. In other words, North Melbourne are well and truly up against this weekend.

Based on recent performances, Port Adelaide could easily have this covered at half time. The Power are looking to keep their momentum going through the concluding stages of the home and away season, and there is no reason why they can’t post a big score against North Melbourne. You would expect North to put up a bit more of a fight than they did against the Suns last week, but a line under six goals for this Port Adelaide side is something punters can take advantage of.

Gray reminded everyone just how good he is last week with 27 disposals and two goals against the Swans. He could have had three goals before quarter time, but teammate Cam Sutcliffe took the advantage from a free kick inside forward 50 and slotted the goal. This week, we’re ripping Gray to go one better. His forward craft will never be in question, because his ability to read the ball off the pack is right up there with the best in the competition. Bear in mind that his only three-goal haul so far this season came in round 11 against Richmond.

Aaron Hall can be quite frustrating to watch if you are a North Melbourne fan, as he shows glimpses of his talent but goes missing just a quick. The former Sun has eight majors to his name from 12 games this year, and we’re predicting he’ll get on the board for us here in our final leg.