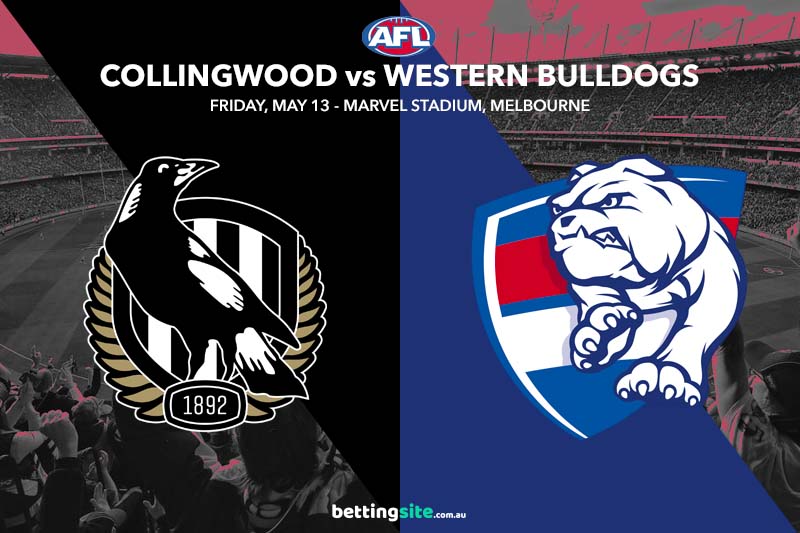 The Collingwood Magpies and Western Bulldogs will meet at Marvel Stadium this Friday night in what is set to be a season-defining contest.

You could not have picked a better game to kickstart round nine of the AFL season, as these two exciting and competitive sides often provide great matches and are both desperate for a win.

Besides the Western Bulldogs’ recent victory over the Pies in 2021, the Maggies actually had the edge over the Dogs, winning four straight contests between 2018 and 2020.

Collingwood Magpies currently sit higher on the ladder than the Dogs after winning four of the first eight games, while the Doggies are one spot below them with one less victory for the year.

Luke Beveridge’s men will start the match as slightly favoured by online bookmakers, as a few important players are set to make a return to the senior squad.

Marcus Bontempelli was rested last weekend against the Power, but the Skipper is set to return this Friday to face the Pies, while Tim English and Alex Keath will also be in the frame come selection.

The Collingwood Magpies will not have any stars returning to the line-up, but their current squad is competing well despite missing most of its spine.

Craig McRae would love to have Brodie Grundy, Jordan Roughead, Nathan Kreuger and Jamie Elliott in the team, but the young Pies will have to make do with their up-and-coming list.

Despite missing a couple of important players inside 50, the Pies have soldiered on with their young stars, as Jack Ginnivan and Ollie Henry have provided a spark for the team up the ground. Both players are worth a look in the goalkicking markets this Friday night.

Patrick Lipinski felt as if he needed to leave the Western Bulldogs at the end of last season in order to progress his career, which is appearing to be an inspiring move from the 23-year-old. Lipinski was originally stuck behind the likes of Jack Macrae, but now he will line up against the elite midfielder.

Macrae has been as consistent as ever this season, averaging a solid 31-disposals per game while tearing teams apart out of the middle. Lipinski has hit the 30-mark in his last two matches and could be out for revenge against his old teammates this Friday, but it will not be an easy task against his All-Australian opponent, who could be in for a massive night as well.

Collingwood Magpies to win by 1-39
We like the underdogs on this occasion as we think the style of play McRae is building with the Pies stacks up well against the Dogs. Fast-moving and aggressive attacks will skittle the small Bulldogs down the ground, as it will expose their undersized defence in open play. Tim English will be underdone after missing the last month with a hamstring, meaning the Aiden Begg disadvantage in the ruck will not be as critical.

Collingwood Magpies to win by 1-39

Ollie Henry to kick 2+ goals
Having kicked eight goals from five matches this season, Ollie Henry looks much more comfortable at senior level. The second-year Pie still looks slightly nervous on the big stage, but his natural movement once the ball is in his area is quite impressive. Henry is a threat both in the air and on the ground, which should see him kick a couple of goals against the Bulldogs this Friday.

The Pies will post a big upset to start proceedings this round, as Pat Lipinski proves the Bulldogs wrong in his new colours and Ollie Henry has a breakout game in the forward half.