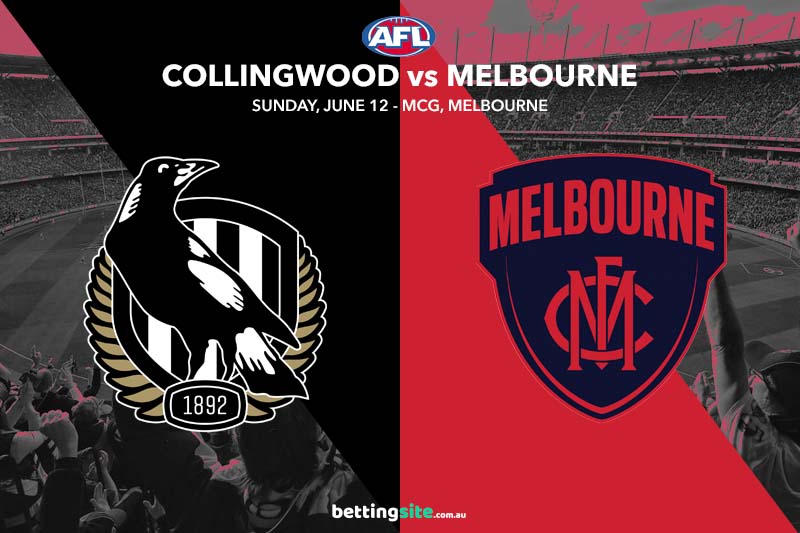 Can the Melbourne Demons regain their winning form after consecutive losses when they meet the Collingwood Magpies in round 13 of the 2022 AFL season at the MCG?

Collingwood Magpies will enter this game full of confidence following three wins on the bounce, including a big victory over the Dockers in round 10. They followed this with two 4-point wins, showing they have the nerve to close out the nail-biters. With the Bulldogs and Tigers nipping at their heels, Collingwood must keep winning to maintain their spot in the top 8 and motivation should be high.

As we love to point out, young sides thrive on winning, and the youthful Magpies will fancy their chances against the suddenly beatable Demons. No doubt the Collingwood coaching staff have poured over footage of the Melbourne defeats with hopes of replicating the magic formula.

The hopes of an unbeaten season have evaporated for the high-flying premiers and their last two efforts have looked laboured and predictable. They have scored a paltry 61 and 54 points in defeat and will now need to rethink their attacking options.

Melbourne Demons optimists will say that it’s preferable to get the season’s losses out of the way earlier rather than later, but the reality is that once a champion side’s aura of invincibility has faded and the fear has gone, every opposing team wants to pile on.

Collingwood ruck Darcy Cameron has made every post a winner since his highly remunerated colleague Brodie Grundy was sidelined with injury. Cameron grabbed 23 disposals in round 12, kicked a goal, shared the hit-out load with Mason Cox, grabbed 9 marks, and topped the AFL fantasy points for the game. Not bad for a second-string ruckman.

We thought that Max Gawn appeared sore and banged up going into round 12, and he came out and played the best game of his career, scooping 28 disposals, winning 30 hit-outs, and booting 3 goals. The big man’s heroics were not enough, and you wonder how long he can shoulder such responsibility when others like Ben Brown go missing. Cameron versus Gawn should be classic ruck contest, not just in the middle and at stoppages, but all over the ground.

The punters are with the Pies here who have shortened during the week. The line sits at 17.5 points, and total points at a solid 160.5. The key to this game whether the Demons can get their scoring back on track. Another total around the 60 points mark will not be enough to secure the win. On that note, we are taking the unders here on total points. The magpies rarely hit 100 points, so this looks like a worthy bet. Total game points under 160.5 is the tip, and we might just loosen the purse strings if the current Melbourne weather persists.

For those unsatisfied with standard even money bets, we have constructed a multi that builds from our main tip. So, we’ll link total game score under 160.5, into Melbourne in first quarter match betting. This simple double header will return $3.13 courtesy of Ladbrokes. Melbourne normally starts well, and we expect them take the lead in early running.