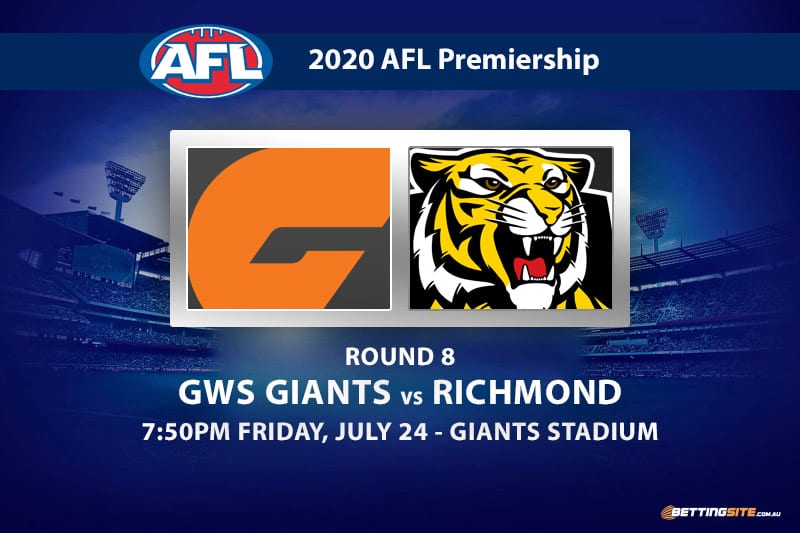 The highly anticipated 2019 AFL Grand Final rematch between the GWS Giants and Richmond Tigers will take place this Friday night at Giants Stadium.

The Tigers ran out 89-point winners in the big dance last year, but they are missing several key players for this clash in Western Sydney.

Leon Cameron will need to find another tactic against Richmond this week as the Giants look to bounce back from consecutive losses to Port Adelaide and the Brisbane Lions.

Toby Greene is expected to return this week for GWS after missing round seven with a shin issue, but Adam Kennedy and Zac Williams are still a week or so away with their hamstring injuries.

Damien Hardwick’s Tigers did more than just hold on last week against North Melbourne, as they completely outplayed the Roos even without a handful of their stars.

Josh Caddy is latest casualty and could miss up to six weeks with a hamstring tear, but David Astbury is a chance to rejoin the Richmond defence this week.

From a tactical standpoint, putting Nick Haynes on Charlie Cameron last week did not make sense to us, as he didn’t have the speed to go with the Coleman Medal candidate and wasn’t able to peel off and intercept any kicks. Haynes was best afield for the Giants in the 2019 Grand Final, taking 15 marks and controlling the ball across half-back, and we expect him to do something similar on Friday night.

Marlion Pickett gave us one of the great stories of 2019 when he made his debut in the AFL Grand Final and almost ran away with the Norm Smith Medal. His performance against North Melbourne last week was easily his best of the year so far, featuring 16 touches, seven tackles and a goal. We think Pickett will relive his 2019 glory and have another great game against the Giants.

Some players love the heat of battle and thrive under adversity, and Toby Greene tops this list for GWS. The brilliant forward is always hard to stop once he’s near the footy and takes his chances for often than not, as evinced by his return of nine goals and three behinds this season. The Giants need a spark from their smaller forwards, as the workload has been carried by the talls in the last fortnight.

Jack Riewoldt started off 2020 with a very good performance against Carlton, but he is yet to rediscover his rhythm since the restart. The veteran forward knows a thing or two about kicking goals against the Giants, however, as he booted five in Richmond’s big win at the MCG last September. Expect Tom Lynch to draw the defenders, leaving Riewoldt to strike with a couple of majors.

The Giants and Lions put on 156 points last weekend, while the Tigers’ past two matches delivered only 160 points in total. We think both teams will play an aggressive style this Friday, probing through the middle of the ground in the hope of catching the opposition defence off guard. Thus, the overs looks like the best play here.

Even though Greater Western Sydney has lost its last two matches, we still think this team has the cattle to get revenge over Richmond. Stephen Coniglio was tremendous in last week’s loss, and we expect him to back up that brilliant performance and captain the Giants to victory in round eight.