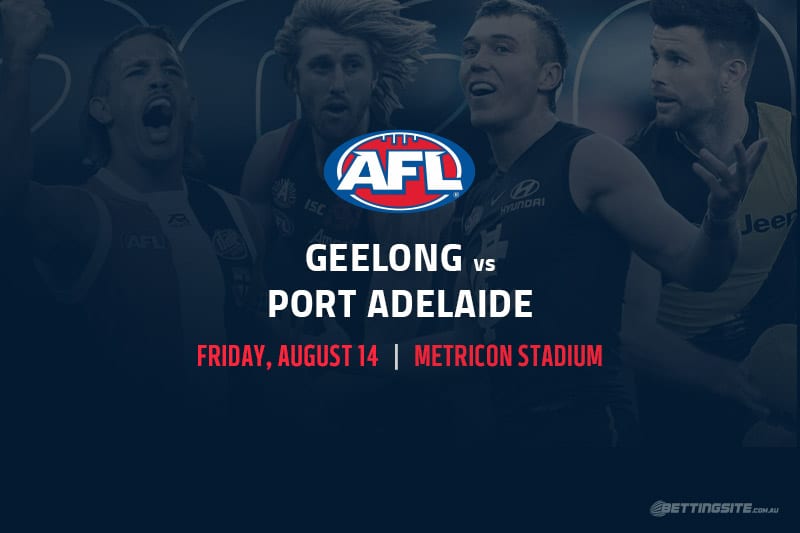 Two of the top four will clash on Friday night when the Geelong Cats take on the Port Adelaide Power at Metricon Stadium in round 12 of the AFL 2020 season.

The Power maintained their four-point ladder lead with an impressive win over Richmond last Saturday, while the Cats dealt St Kilda a 59-point reality check on Monday to go third in the standings.

Sam Mayes returns from suspension for Port Adelaide, but second-year star Connor Rozee remains sidelined with a heel injury that forced him out late on the weekend.

Geelong suffered no casualties in its dominant win over the Saints, while Quinton Narkle and Jordan Clark are both fit to play on Friday.

The Cats were in full flight and leading the league when they lost to the Power last season in a thriller at Adelaide Oval, so they will be determined to return the favour on the Gold Coast.

A move to the wing has helped get Zach Tuohy and his beautiful kicking involved in more passages of play for Geelong. Although he was always finding plenty of footy at half-back, this new role has boosted the Irishman’s output up the ground. Tuohy has eclipsed 25 touches in two of his last three games against the Power, so he is a good chance for 20 this Friday night.

A big part of Port Adelaide’s improvement is owed to its young stars, and Zak Butters might be the pick of the lot. He was very sharp with 24 touches against the Western Bulldogs and followed up with 20 disposals and a goal against the Tigers. The crafty second-year player is enjoying a purple patch of form and will stand out against the Cats with his clean hands and gut running.

Gary Rohan could have singlehandedly beaten St Kilda last round if he had kicked straight, as he slotted four goals and three behinds in his best performance of the season. Rohan’s pace and marking ability could be problematic for the Power, as they do not appear to have a defender that can match him for pure athleticism.

There’s nothing better than a young key forward that has confidence in the air and loves owning the moment with accurate set shots, which is why we rate Mitch Georgiades very highly amongst his draft class. He went goalless last week but still produced an assist and two score involvements, so we are backing Georgiades to be in the right place when the Power break forward early.

Maybe it’s because teams are looking to score more efficiently, or perhaps the short breaks have led to lapses in defensive pressure; either way, scoring has lifted significantly during these rapid-fire fixtures. The Cats and Power both posted 93 points in round 11, two of the highest scores we saw during the week, and we think they will pepper the goals frequently on Friday.

Charlie Dixon was embarrassingly inaccurate in front of goal last week, but the rest of his game is in great shape. If he has a big night and the likes of Travis Boak and Ollie Wines both continue their ripping run of form, the Power could run over the top of a Geelong side coming off two rather cruisy wins.