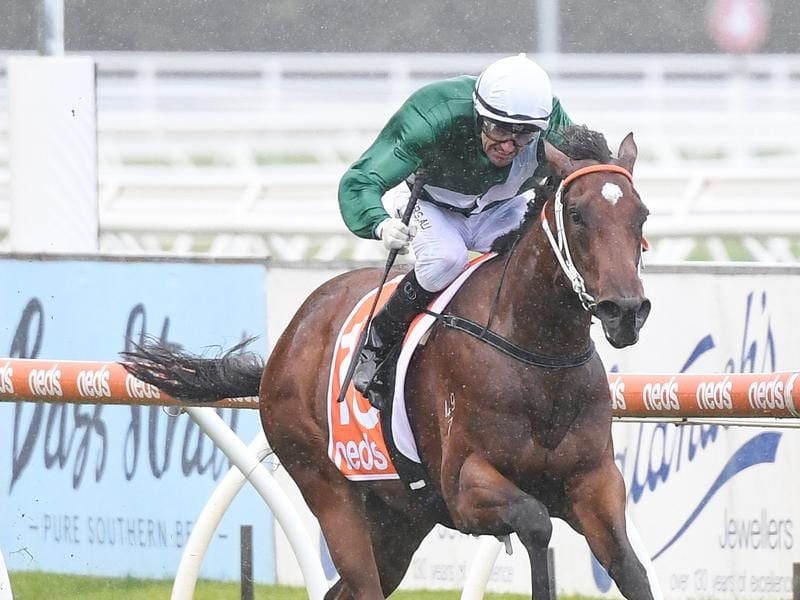 Promising two-year-old Diala has underlined her potential for Hawkes Racing in winning at Caulfield.

Diala has provided Hawkes Racing with a glimpse of her potential with victory in appalling conditions at Caulfield.

Saturday’s success in the Take It To The Ned’s Level Handicap (1200m) for two-year-olds showed the filly was adept on wet ground in leading throughout.

Wayne Hawkes, who trains in partnership with his father John and brother Michael, said the success could be a pointer to options later in her career.

“It makes a huge difference (handling the wet) as it’s quite often wet in the spring in Melbourne and its always wet in the autumn in Sydney,” Hawkes said.

“Even if you’ve got a really good horse, you want it to be a wet tracker nowadays as there’s two big carnivals with wet tracks.

“Races like this are going to come along in the next couple of weeks so there’s another one for Diala, that’s for sure.”

Diala had one run late last year before being put away to strengthen with Hawkes saying the filly was immature last campaign.

“She trialled up not too badly at Flemington last Friday,” Hawkes said.

“She showed some natural early speed and pace and he (Dunn) was just riding her nice and quiet.

“I think the winning move was sitting quietly before the 300 metres when he pushed the button.”