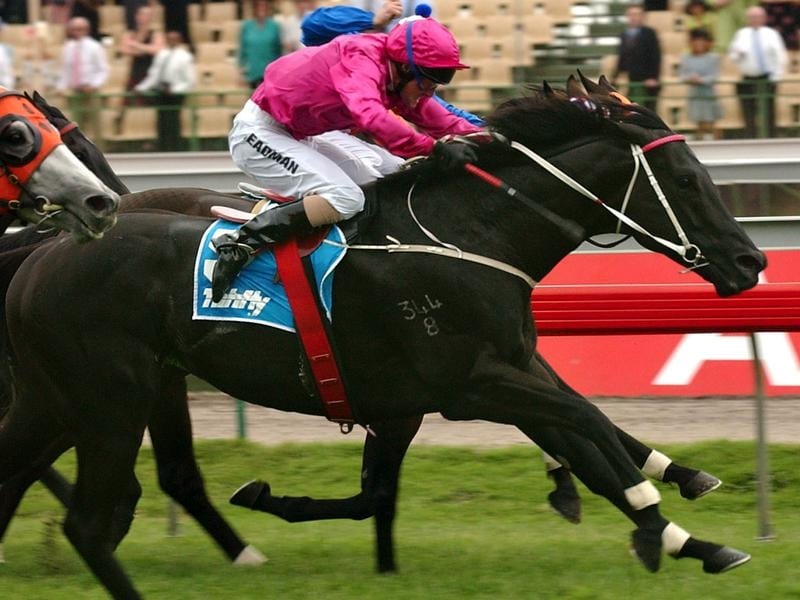 Champion racehorse and stallion Lonhro is about to celebrate his 21st birthday.

The son of a champion who became a champion on the track and in the breeding barn is about to have a milestone birthday.

Lonhro, described by his former trainer as his best ever and by his jockey as a dream, officially turns 21 on Tuesday.

He raced 35 times registering 26 wins, 11 at Group One level, including a Caulfield Guineas, an Australian Cup, two George Ryder Stakes and a Queen Elizabeth Stakes.

For his trainer John Hawkes, Lonhro was the perfect horse.

“All he wanted to do was please you,” Hawkes said.

“Horses like him are born good. All I did was try to mould him.”

Hawkes named two races, the 2004 Australian Cup at Flemington and Lonhro’s next race, the George Ryder Stakes at Rosehill, as his most memorable performances.

The Australian Cup was Lonhro’s last race in Melbourne with jockey Darren Beadman extricating him late for what had looked like an impossible win.

“It didn’t look too promising, but being the jockey he was, and Lonhro being the horse he was, they stayed balanced and didn’t get uptight,” Hawkes said.

“In the Ryder no horse in the world could have beaten him. He was as fit and as good as we could possibly get him.

“I’ve trained a lot of good horses, but him and his father, they were the best.”

Now a Godolphin assistant trainer in Sydney, Beadman rode Lonhro to 16 of his victories, wand also trained one of his best sons, Impending, to Group One success.

Beadman said Lonhro was a jockey’s dream to ride.

“He had so much power and acceleration, he was a superb athlete,” Beadman said.

“He could get you out of a difficult situation in a race in the blink of an eye.

“As soon as you started to pick him up he knew what was required.

“I was just a passenger most of the time.”

Lonhro ran his last race in the Queen Elizabeth Stakes in the autumn of 2004, finishing second to the front-running Grand Armee, beginning stud duties at Woodlands the following spring.

He has produced 88 Stakes winners, 11 at Group One level, among them the Golden Slipper winner and successful sire Pierro, Impending, Exosphere, Beaded, Mental and Denman while more than 70 per cent of his runners have won races.